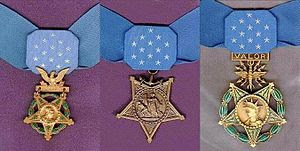 Memorial Day is almost upon us, so this seems like a good time to celebrate the heroism of those who put their lives on the line for us. I'm singling out 13 of those who have already been singled out with the Medal of Honor, bestowed upon them by the President on behalf of the American people.

No matter how I feel about our recent wars -- and I admit I am ambivalent at best -- I cannot be more sincere in my admiration and gratitude to these amazing men.

1) Sergeant Clinton Romesha. Army. Afghanistan. 2013. The most recent recipient, Sgt. Romesha earned his Medal when he and his comrades were surrounded and attacked by as many as 300 combatants. Without regard for his own safety, he ventured off without cover to seek reinforcements. Over the next several hours, though seriously injured by shrapnel from a grenade and targeted by a sniper, he continued on until he could reach radio equipment. Once there, he not only radioed for help, he successfully directed air support to the enemy. His extraordinary effort gave his team the time to reorganize and ultimately defeat a much larger, better prepared enemy. Today he lives with his wife and children in Minot, North Dakota.

2) Corporal Dakota Meyer. Marines. Afghanistan, 2011. Corporal Meyer distinguished himself when his unit was ambushed. He jumped into a truck and drove, drawing fire to himself and away from fellow marines. Corporal Meyer not only managed to kill a number of enemy fighters, he evacuated friendly Afghan soldiers, many of whom were wounded. Despite a shrapnel wound to his arm, the Corporal went back repeatedly, alone and on foot, to recover the bodies of four fallen comrades. He requested that at the moment he was honored by the President there be simultaneous commemorative services at other locations for the families of the four who died in that battle.

3) Staff Sgt. Leroy Petry. Army. Afghanistan, 2011. Sgt. Petry and his team were fired upon with automatic weapons. Though wounded, he responded bravely when he saw a grenade lobbed at his men. He picked it up and threw it, thereby saving his men. But tragically the grenade went off at the moment of release, blowing off his hand. Nevertheless, Sgt. Petty is the only Medal of Honor recipient who is still on active duty.

4) Staff Sgt. Salvatore Giunta. Army. Afghanistan, 2010. While on patrol, his team was ambushed. Without regard for his own safety, Sgt. Giunta exposed himself to fire twice within a matter of moments to save others, first to administer first aid to his fallen squad leader. Though injured, the Sgt. was still conscious enough to spot insurgents carrying away American soldier. He engaged the enemy, killing one and injuring another so he could rescue and provide aid to that soldier. Thankfully, this brave young man survived and is now attending college in Colorado.

5) Staff Sgt. Robert Miller. Army. Afghanistan, 2010. Sgt. Smith was leading a patrol through a small, narrow valley when they were ambushed. With total disregard for his own safety, he called for his troops to move back to cover while he charged the enemy. He not only killed at least 10 insurgents before losing his life, his action also saved seven American soldiers and 15 soldiers of the Afghanistan National Army.

6) Sergeant Jared C. Monti. Army. Afghanistan, 2009. Sgt. Monti's 16-man patrol was attacked by 50 enemy soldiers. During the ensuing battle, one of his men was wounded, out in the open, vulnerable in front of the enemy. It took three attempts, but Sgt. Monti saved that soldier, even though it cost him his own life.

7) PFC Ross McGinnis. Army. Iraq, 2008. When a grenade was thrown into his crew's vehicle, he shouted a warning so his fellow soldiers could escape and then threw himself on top of it.

8) Petty Officer Michael Monsoor. Navy SEAL. Iraq. 2008. An enemy grenade was tossed and it bounced off his chest. Instead of escaping, he shouted a warning to the rest of his SEAL team and gave his life when he threw himself onto the grenade.

9) Lt. Michael Murphy, Navy SEAL. Afghanistan. 2007. While on a special reconnaissance mission in rugged terrain, Lt. Murphy's unit was discovered and outnumbered by the enemy. He tried to call for help, but their telecommunications equipment wouldn't work in this remote area. He deliberately moved to an open area, exposing himself to mortal injury, in order to call for support and rescue for his team.

10) Corporal Jason L. Dunham. Marines. Iraq, 2007. Mortally wounded when he threw himself onto a grenade, saving the lives of at least a dozen fellow Marines.

11) Sgt. Paul Smith. Army. Iraq, 2005. When his Army construction (meaning not combat ready) company was attacked, he hastily organized a defense. Though he was killed returning fire, his heroism enabled more 100 of his fellow soldiers to safely escape.

12) Master Sgt. Gary Gordon. Army. Somalia, 1993. Armed with only his rifle, Sgt. Gordon protected the site of a helicopter crash for hours until another aircraft could come for the wounded crew. He was shot more than once and when he realized his wounds were fatal, he handed his gun to the injured helicopter pilot with the words, "Good luck." That four-man helicopter crew was rescued alive.

13) Sgt. Randall Shughart. Army. Somalia, 1993. Sgt. Shughart volunteered to enter an area dense with landmines and enemy personnel to rescue the crew of a downed helicopter. It took multiple trips and resulted in him receiving mortal wounds, but he bravely recovered three dead soldiers and brought the pilot to safety and medical attention.

Day 22, Wednesday: Rant about something. Get up on your soapbox and tell us how you really feel. (a pet peeve, a current event, a controversial topic, something your husband or roommate or neighbor or boss does that really ticks you off)

I am so fucking tired of this Recession! I hate worrying every three months (each quarter) that I'm going to be let go. There aren't a lot of jobs out there ... fewer at my salary ... fewer still for someone over 50. I'm angry, I'm scared, I feel helpless.

In the 1990s, we hired people then who were my age now. We hired anyone whose knuckles didn't drag. We had more jobs than people.

But now it's my turn. Now I'm facing unemployment, but there are no jobs. This is not fair.

Can't we turn the page already? Can't we start over with a fresh new economy? Can't I stop worrying?

Your help is needed

Oklahoma has been devastated by tornadoes. Lives were lost and homes destroyed. And families torn apart.

Because if you have ever shared your home with a dog or cat, you know that they become your family. And during storms like this, they get frightened and frantic and run away.

Often, when their humans have to find temporary housing in shelters or
hotels/motels, dogs and cats aren't welcome. Where can they leave their furry family members?

It's at times like this when local animal shelters are so important. If you have a few dollars to share, please send them to the Central Oklahoma Humane Society. Their Disaster Relief Fund is up and running.

The hole in my back is making me cuh-razy! It's less visible than the black stitches on my lip, but it's actually the more serious wound, from the more suspicious mole. And there's nothing I want to do more right now than rip off the big, itchy adhesive and give it a good scratch. But I won't.

But I want to.

The stitches on my face are less embarrassing than I thought they'd be now that the swelling is down, and I've been careful with the regular, by-the-rules application of antiseptic ointment.

This will be over on Tuesday! 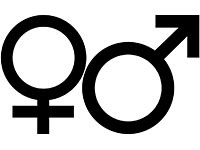 I worked for a couple years with an art director I clashed with. Daily. So I thought he disliked me. I found out -- when our little creative team blew up in internecine conflict -- that he really kind of admired me and totally had my back. He was back in the Loop today for the first time in years and he really wanted to see me. Three of us had lunch together today. It was nice, but it also confused me. So he considers us friends? I matter to him? Who knew?

My best friend, on the other hand, completely (and I think willfully) misunderstood an email I sent him and tore a strip out of me. His wife's grandfather just died and he was feeling overwhelmed by family obligations and he took it out on me. Understandable, I suppose, but not very nice. I'm not even sure he realized that's what he did.

Why are men so complicated? Even men I'm not sleeping with!

Day 21, Tuesday: A list of links to your favorite posts in your archives

This is my favorite Thursday Thirteen, and I've done literally hundreds of them. It's an original idea -- women I'll look up when I get to heaven -- and I think I did a good job with it. Scroll through the comments and you'll see one from columnist John Dickerson. It made me happy that I got to make him happy. People really do read what we write!

I like this Trifecta entry based on the prompt, "Home." Writing it made me happy. Reading it makes me happy.

I like this one about Peggy Noonan because it's well written, rather timeless (as long as Peggy keeps appearing on Sunday morning TV), and because it still somehow gets a lot of hits and really annoyed a stranger named Steve.