The government is still in shut down. The House Republicans have allowed a hand full of Tea Partiers to march them into a box canyon and it's hard to feel sorry for them as their poll numbers plummet to historic lows.

As appalling as the GOP's behavior has been, I'm not loving President Obama so much right now, either. He's distant, aloof, seemingly almost disengaged as the Republicans wage war on one another. It's as though it's not enough for Obama to win this round. The Tea Party has to suffer a humiliating loss, as well.

Which is why I'm thinking longingly of JFK. 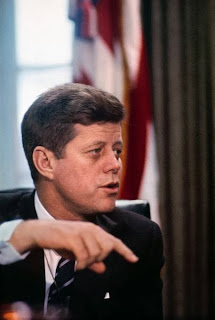 As JBKO recounted in Historic Conversations with John F. Kennedy, he never lost his empathy. No matter how angry he became with an opponent, he always kept his adversary's situation top of mind. During political negotiations and fights, he kept his public and private faces separate. He could cajole and threaten and berate in private, but in public he was always respectful (if, at times, frosty) so that his enemy could make a graceful exit.

The 1962 Cuban Missile Crisis was resolved peacefully, without a shot being fired and with nuclear war averted, because while he played hardball with the Soviet leader and gave up nothing behind the scenes, JFK was willing to let the world believe that Krushchev had won an important concession from the mighty US. He knew how important it was for the Kremlin to tell the Russian people that America removed missiles from Turkey as part of a negotiation with Krushchev, even though they were obsolete and would doubtless have been removed that fall anyway.

War hero, Lothario, intellectual ... Kennedy was supremely confident in his masculinity and his abilities, which made games of "¿quien es mas macho?" irrelevant. Those qualities helped the world avoid tragedy.

I hope President Obama puts the full faith and credit of the United States ahead of his own political victory. I worry about another Recession. And while it will undoubtedly be the Tea Party's fault, the President won't be blameless.

I've been worried lately. Because worrying about situations upon which I can have no impact is what I do best.

My niece is so happy away at college in Michigan. She's escaped the ties that bound her to family in Chicagoland and has come into her own. Blossomed. She's so proud of the home she shares with her boyfriend, of her job at Culver's, of her good grades and new circle of friends.

The only dark cloud on the horizon is that she feels so limited in her options after graduation. Not because of student debt or the job market. Because of her mother, my kid sister. My niece worries that she has to live somewhere where her parents can find employment.

My niece was very close to her grandmother, my mother. She never went more than a week without visiting Grandma's house. She saw how close her mother and grandmother were, how interdependent. Similarly, my mother and her own mother were very close and both lived their entire lives in the same suburb, just blocks from one another. When I was a toddler, my parents bought my mother's girlhood home from her parents, and that's where my mom was living when she died last year.  My grandmother died without ever having boarded a plane.

But my niece is a more independent, ambitious, and curious soul than her mother, grandmother or greatgrandmother. I'm not sure that consciously choosing a constricted life would make her happy. Instead, it might leave her resentful.

And if she marries her boyfriend, which is her current plan, there's another wrinkle. Unlike her father, whose family is small, scattered and a bit estranged, her boyfriend's family is vast and loving. And nearby where they live now. It's possible -- even likely -- that he will want to be near his own parents, aunts and uncles. So what will they do? Find a city equidistant between families and hope they can find jobs?

I fear that my mother's legacy to her beloved granddaughter is a life full of "what if's." I hope I'm wrong. I'd love to be wrong.

From Furious Love: Elizabeth Taylor, Richard Burton and the Marriage of the Century, by Sam Kashner and Nancy Schoenberger. Page 6:

[Mike] Todd lived on chutzpah and hype and bought Elizabeth magnificent gifts, including a blinding 27-carat diamond. He dazzled her with attention.

"I stood in the storm. When the wind did not blow my way — and it certainly has not — I adjusted my sails."

I DVR Katie every day and watch it in the evening. Mostly because I like seeing what Katie Couric wears. I can't get over how good she always looks!

Today one of her guests was Cate Edwards, daughter of Elizabeth Edwards, a woman whose life touched mine in profound ways. Cate was on to promote her work during October, Breast Cancer Awareness Month, and her focus on women, like her mother, who live out their lives with incurable breast cancer. And how Elizabeth lived! She was a wonderful writer, a trait that naturally I admire. But even more than her words, her indomitable spirit touched me. Elizabeth was a truth teller. She examined her life and exposed her foibles to the light.

Cate talked about her dad and his fall from grace, about her five year old half sister, about her husband. I was pleased that she seems to be doing so well. I was moved by how affectionately she remembered her mother -- as a whip smart woman that you just couldn't win an argument with. Couric shared the quote that opened this post, and Cate said that is what she will tell her own children (not yet born) about their grandmother.

It made me happy to think of Elizabeth again. If my TBR pile wasn't so deep, I'd revisit her books. I hope the gallant lady is resting in peace.

BTW, I met John Edwards at a fundraiser in 2007. He remains the best looking person I have ever seen in real life. Perfect, virtually unlined skin, blue eyes (and a tie that matched the blue perfectly), hair that you just know smells good. And yet his behavior reveals a soul that's pretty empty. Go figure.
Posted by The Gal Herself at 10/15/2013 02:44:00 AM 3 comments: