I wanna be Laura Bush 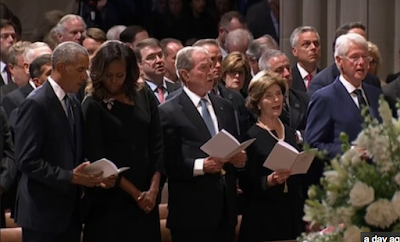 After watching more than hour of Aretha Franklin's Friday funeral and all of John McCain's Sunday service, I've decided that if one finds oneself at a big, serious religious event, the slot between George W. Bush and Bill Clinton is the place to be.

You can't tell from this photo, but W. was often shown leaning over to his wife or Michelle Obama, whispering with a bit of a smirk on his face. The Twitterverse also caught him passing candy to Mrs. Obama. I never have candy at these events!

And then there's Bill. His joie de vivre is on full display whenever he hears church music. After two days of services, I've come the conclusion that there isn't a hymn he doesn't want to sing.

This has nothing to do with politics. I still believe the world would look different and America would be a better place had John Kerry won in 2004. I still don't like torture, or anything about Dick Cheyney. I think that queasy feeling I got during all that Wall Street deregulation was proven prescient. And Katrina! That was the most shameful way I've seen America treat her own ... until Maria hit Puerto Rico. (That's the thing, isn't it? Since George W. Bush isn't the nightmare bully who resides at 1600 today -- Wait! It's Labor Day! I'll bet Trump is off playing golf somewhere. -- it's easy to forget how tough things were during W's administration.)

Yeah, yeah. Bill had his problems with women. I'm not forgetting that. But Trump and his payoffs leave him in the shade.

But I didn't want this to be about how Trump (who isn't in the photo above because he wasn't invited to McCain's funeral) has coarsened American life and how far he has lowered the bar. It's about how fidgety I get at formal, somber events and how I felt a very human kinship with these two historical figures while watching the funerals. I like that human connection with my Presidents.