1) In this song, Chyvonne Scott sings that she's sick of her lover's "conniving." Tell us about a time you felt deceived. (It doesn't have to involve romance.) Remember when Attorney General Barr did his book report on the Mueller Report? I felt deceived and disappointed. I had hoped Barr would rise to the occasion, but instead he behaved like a partisan and shaded the truth. There are people -- voters! -- walking around out there who believe Robert Mueller exonerated President Trump.

2) She realizes it's time to move on to another love. What's your favorite love song? Is it about a relationship that's running smoothly? Or is it like "I'm Moving On," about an unhappy love affair? My favorite songs change. The one that's on my mind this morning is a sad one, about a non-affair. "You Don't Know Me" has been recorded time and again since Eddy Arnold had a hit with it in 1956. But here's my favorite, by Jann Arden, from My Best Friend's Wedding soundtrack.


3) Though Chyvonne Scott enjoyed only limited success as a recording artist, she was very popular in New York clubs. When did you most recently listen to music performed live? To celebrate Black History Month, a faith-based Chicago rapper, John the Rap'tist, performed at lunchtime at our office. I enjoyed his talk before (about how Christianity informs his work) and afterward (about working with Beyonce and Jay-Z) more than his performance. He was completely charming, but I don't like rap.

4) In 2017, this song appeared on a Samsung commercial that poked fun at rival iPhone. Is your cell phone an Apple or Android? How did you choose your phone? Nearly two years ago, I went into the local T Mobile store with my broken phone and said, "HELP! I need a new phone but I don't use it very often so give me a cheap one." They hooked me up with Aristo. $50 down and $6/month, about $120 altogether. It's a fine phone that lets me take pictures, text, summon Uber, and occasionally actually make a call. I don't need more. 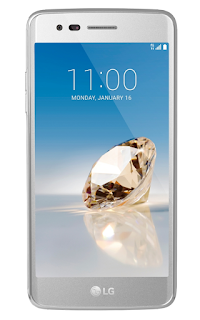 5) Chyvonne is an unusual name. In 1965, when this song was first released, the most popular baby names in the US were Michael and Lisa. Do you have any Michaels or Lisas in your life? So many Michaels! From my brother-in-law to my boss. Only one Lisa, though. That would be Snarkypants herself. She recently gave me access to her Netflix account, which is life altering for a vid kid like me. (Thank you, Snarkela.)

6) Also in 1965, Winston Churchill died. In researching this week's Sat. 9, Sam discovered a Churchill quote that's new to her: "I am always ready to learn although I do not always like being taught." Share something interesting that you recently learned. You know those window envelopes you get in the mail every day? The man who invented them was Americus Callahan of Chicago, IL. He saved American businesses tons of time and money by eliminating the need to type or print an address on the outer envelope. Thank you, Americus!

7) In 1965, one of the most successful movies ever made, The Sound of Music, was released. Have you ever seen it? A gazillion times. Maybe more.

8) Lava lamps were already popular in England and Brussels, but in 1965 they were introduced in the US. Do you think lava lamps are cool? I think they're kinda silly. They don't emit much light, you know.

9) Random question -- You have to buy something very personal that you find embarrassing. Would you rather pay cash for it, so your identity would be unknown but you'd have to face the cashier? Or order it online, where you could avoid looking anyone in the eye, but you have to share your name and address? Online. It feels more anonymous, somehow. Though now that you mention it, it's really not since you have to give all your personal information. I suppose it's the price I pay to avoid eye contact.

I spent June 3 within the Friendly Confines of Wrigley Field with my nephew! It was a lovely way to spend the day.

I got a good price for the tickets. It was a one-and-done with the Angels, a makeup for the game last month that was snowed out. It seemed fitting that I be there, since I was in LA at the TCM Film Festival, getting a little sunburn on my neck, when LA's team was getting snowed on here in Chicago.

I'm impressed by what a baseball nerd my nephew is. When he was a wee one, we used to spend summer Sunday mornings with the sports section, me explaining the National League standings. I told him there was a lot of math involved with being a Cub fan, and if I had been a better student, I would be a better Cub fan today. As he got older, we progressed to batting averages and ERAs. It seemed like a painless way to encourage him to pay attention in class.

The student has far exceeded the master. My nephew knows his Sabermetrics! He ignores my old school reverence for batting average and rhapsodizes about the OPS (on-base slugging percentage, for my fellow oldsters out there).  I love what a baseball nerd he's become.

The game was a fine affair. My guys snapped a losing streak with a 6-run sixth inning and ended up winning 8-1. Jon Lester went deep into the game and new Cub Carlos Gonzalez made his Wrigley Field debut with a terrific catch in the outfield. I just wish Anthony Rizzo had gotten a hit. Of course, I'm sure Rizz wishes that, too!

After the game, we stopped at a Wrigleyville dive bar for drinks (Auntie) and ice water (Nephew) and chips. We talked about school -- he's doing very well and got more scholarship money for his sophomore year. Enough to make his own dorm room affordable! Yea! I wish he was having more fun this summer -- he spends an awful lot of time with his parents and I worry about his cocooning at home.

But he loves college. He says he loves being home and sleeping as long as he wants every morning. He hopes to find a summer job soon. I didn't sense anything wrong and I guess I shouldn't overlay my expectations on him.

It's just that I wish he'd find his tribe. People who care about politics and policy and cats and baseball as much as he does! Maybe next year, when his poli-sci classes get more advanced.

And besides, I worry too much. We had a good day, and just look at the marquee that said farewell to us on the way out! 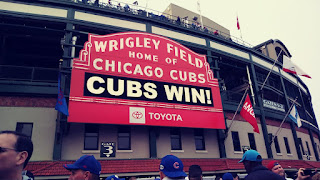