1) This song is about a woman who married at 20. It's estimated that the average American groom is 2.5 years older than his bride. Why do you suppose that is? Peer pressure, I suppose. Until recently, it wasn't fashionable for women to date younger men. And if you're not dating them, you're not marrying them.

2) A 2014 study shows the bigger the age gap in a marriage, the more likely the couple is to divorce. What do you think is the reason for most divorces? Infidelity, at least on the face of it. Though I guess under closer examination, we'd discover that people cheat because they're unhappy ... and they're unhappy because they've been fighting about money, or kids, or they feel misunderstood or unappreciated.

3) Reba's second marriage recently ended. Statistics show that second marriages are more likely than first marriages to wind up in divorce. Why do you suppose that is? Oh, hell! I don't know! There are few topics this old spinster is less familiar with than matrimony.

4) This week's featured artist, Reba McEntire, was discovered when she sang The National Anthem at an Oklahoma City rodeo. Have you ever been to the rodeo? Yes. I didn't care for it. It seemed terribly unkind to the animals.

5) Reba dropped out of Southeastern Oklahoma State University to go to Nashville and pursue a recording career. In that way, she's like the woman she sings about in this week's song. "She's done what she should, should she do what she dares?" Do you ever regret a risk or opportunity you didn't take? As Francis sang, "Regrets, I've had a few." I think we all have. I try not to think about my regrets too much, though. Not productive.

6) Reba's heroine is "dying to try something foolish, do something crazy, or just get away." Does that sound like you? What would you do, just for yourself, if time and money were no object? Really fix this place up! I have such plans, so many daydreams about how I'd redecorate my home. New flooring, new bathroom, new window treatments.

7) Reba recently became a spokesperson for Kentucky Fried Chicken. Whose chicken do you eat most often: Popeye's, Church's, Chick-fil-A or KFC? Popeye's, because it's the most convenient option that's not Chick-fil-A. I refuse to support a company that opposes equal rights for my gay friends, who are dearer to me than family. Also, as a Christian, I am offended by the way Chick-fil-A has (at least in the past) marketed their Christianity. Too often they have sounded like they were saying, "Eat here because we love Christ!" To me, that's selling faith, and I learned in Sunday School how Jesus felt about moneychangers and church. I'm sorry for the mini-rant, but this is a firmly held conviction.

8) In 2001, Reba starred in her own sitcom. On the show, her character is first an administrative assistant and then a real estate agent. Have you ever tried your hand at either of those occupations? If

not, which do you think you would be a better fit for you? I actually did both at once, when I was an admin at a real estate office. It was a second job that I got when I was just out of high school so I could pay for my trip to Europe. I got there at 8:30 on Saturday and Sunday, opening the door, turning on the lights, making coffee and manning the phones until the agents -- who wanted to sleep in -- made it to the office. I got to leave at 12:30. I liked it. It didn't pay very much at all, but it was low stress. It's the kind of job I'd like to have again, when I retire from advertising.

A cult of one 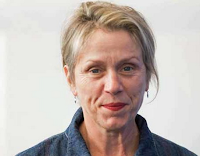 In preparation for Oscar, I finally saw multi-nominated Three Billboards outside Ebbing, MO. I know I may be alone in this, but I did not like Frances McDormand. She is favored to win the Best Actress Oscar, as she did for Fargo twenty years ago. I was alone in not especially liking her in that, either.

Regardless of the role, I get nothing but opacity from her. No sincerity. Just technique. Considering the esteem she's held in by her peers, I realize I'm a cult of one. But there's no escaping it. I don't enjoy watching her.

On the other hand, there's Sam Rockwell. He's nominated for Best Supporting Actor for the same movie -- though I would argue his is not a supporting role at all. Anyway, he plays a dim, reactive and racist cop. His character is just as foreign to me as hers, and lacks nobility, as hers does. Yet I appreciate his performance so much more.

I always like Sam Rockwell. I sense that he has genuine affection for everyone he plays, even the unlikable fellows. I enjoy watching him play even icky guys. I hope he wins his Oscar Sunday night. Not only for Three Billboards, but for his varied career.