I've been spending quite a bit of time with Vera Miles lately. She's an actress I haven't ever given much thought, but thanks to her short association with Alfred Hitchcock I've seen two of her most important movies in rapid succession.

The movies are at either end of the Hitchcock spectrum -- one small, quiet, subdued and little known; the other is Psycho. ('Nuff said.) Watching both of them with my classic movie club, seeing them on the big screen without constant interruptions for commercials featuring car dealerships and carpet installers -- which is how I saw Psycho time and again on commercial TV -- I came away surprised by how compassionate both of these films are to the mentally ill. 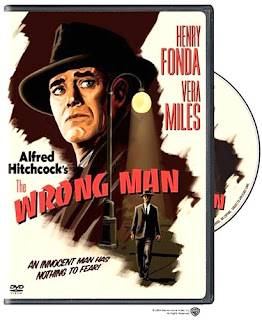 First, The Wrong Man. This is the only time Henry Fonda worked with Hitch, and it's a shame because he brings tremendous gravitas and decency to the proceedings, just by being Henry Fonda. He plays Manny, a jazz musician/husband/father of two. He's of average height and build. When he travels between his home and the nightclub where he plays with the band, he wears a standard gray overcoat and a typical black hat. When a series of armed robberies take place in his neighborhood, he finds himself a suspect. Because of the hours he works, he doesn't have much of an alibi. The police keep telling him, as the poster says, "an innocent man has nothing to fear." But he finds himself booked, arraigned, and tried. And we know he didn't do it. We feel his loss of liberty, we hear the cell door slamming behind him, and it's claustrophobic and scary.

Vera Miles plays his wife. She's the one who comes slowly unglued during the ordeal. They're an average family with one income and a mortgage -- she doesn't know how they'll pay for the legal representation they need. She doesn't know how she'll cope, taking care of her boys on her own. She becomes paranoid and depressed. It manifests itself at first by the way she laughs inappropriately, or sits and stares a bit too long, or (most tellingly) hugs and comforts herself. This is a woman in pain.

Because the film was made in 1956, some things do appear dated. And it doesn't help that her shrink is played by Werner Klemperer, better known as Col. Klink. But if you can get past that, the story of Manny and Rose is quietly harrowing and quite moving, without lurid theatrics. Fitting because this is based on a true story. Perhaps because my oldest friend is battling bipolar disorder, and because I have danced with depression myself, The Wrong Man really touched a chord with me.

Then, Sunday, I saw Psycho.  As noisy and raucous and lurid as The Wrong Man is subdued. There's sex and screaming and frantic, screeching strings as the ugly story of Norman Bates unfolds. (If you're one of the few people on the planet who doesn't know this story, stop reading now because spoilers lay ahead.) 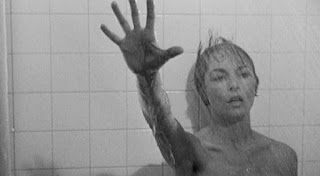 In the past when I've seen the iconic shower scene, I've been repulsed and terrified imagining what it would be like to trapped in a stall like that. Naked, defenseless, with nowhere to turn as a madman carves away at me. Seeing it uninterrupted on the big screen, it's less scary than cruel. For once I didn't imagine myself and my own bathroom, but instead was captured by Janet Leigh's eyes. She's confused, she's shocked, and as her life literally goes down the drain, she seems to be reaching out to us -- the audience -- for compassion. I responded to her plight with as much humanity as horror, which is what Hitchcock meant, and what ca 1960 audiences must have felt.

Likewise, I left the theater reevaluating Norman Bates. When Vera Miles goes to the big house behind the Bates Motel in search of clues to her sister's fate, we get a painful glimpse into Norman's short and tortured life. Stuffed toys (a precursor to his penchant for taxidermy) and a small child's phonograph and a single bed, pushed up against the wall ... this is Norman the adult's sad existence. It broke my heart. By now I'd seen what he'd done to Marion/Janet Leigh and Arborgast, the private detective. And yet I felt as much compassion for him as I did revulsion for the way he must have been treated by his monstrous mother for him to be so permanently, irreparably infantilized. He wasn't born a monster, he was made one.

Day 20: What pressure did you feel today?

Choosing between Cubs/Cardinals and my movie Meetup (Psycho on the big screen!). I realize how ridiculous it is to think that I have any impact on the outcome of an MLB game, so I went to the movie. And the Cubs lost. AAARGH!

Thinking of the Cubs (and I have been doing that a lot lately) ... My aunt gave me a copy of Calico Joe, the John Grisham novel that revolves around the 1970s Chicago Cubs. It's a moving little book and I highly recommend it. 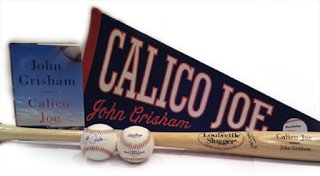