That wasn't so bad

Last week, my older nephew -- the one in the Navy -- asked me if I'd have dinner with him on Sunday. He's driving cross-country from his base in Washington State to his new assignment in Connecticut.

I was dreading it. He annoys me with his insensitivity and to-the-right-of-Attila-the-Hum politics. But I was touched that he wanted to see me, especially since his mother, my older sister, has told him a lifetime worth of pretty horrible things about me. 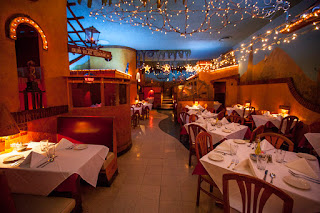 So we met at The Italian Village. It's the charming, old-school Chicago landmark restaurant where my parents/his grandparents had their first real date, nearly 65 years ago.

I was able to kill quite a bit of time with the story of how his grandparents met and got together. I stretched the story out to the point of Tom Hanks/Meg Ryan rom-com. Then I asked him about his life in the Navy and his girlfriend Shelby. By then, 2 and a half hours had gone by and I could slip away, without the word, "Trump" ever having been spoken.

I did let him get away with two unfortunate uses of the word, "retarded."  I feel bad that I didn't correct him, but it was more important for me to get through the dinner smoothly.

I'm relieved and, to be honest, a little happy. I've been wrestling mightily with the sad state of affairs within my family. I don't like my sisters, they don't like me, and they don't really like each other that much. I have no desire to change this situation. They are the way they are -- if the three of us met as strangers we wouldn't like each other. So "regret" is the wrong word for the way I feel. I just wish things were different.

But maybe it skips a generation. My niece and nephews seem to think I'm pretty neat, regardless of what they may hear at home. And that soothes me.