Sunday Stealing: The ABC's of Meme

A- Advocate for: animals

B- Best Feature: my green eyes

C- Could do without: my belly fat

D- Dreams and desires: can be quite lusty

F- Favorite past time: reading, TV, farting around on the Internet

I- If I had a million dollars: I'd buy you some art, like a Picasso or a Garfunkle

N- Never again will I: sit through the crappy movie, Love Happens

Q- Quote: "East is east and west is west and if you take cranberries and stew them like applesauce they taste much more like prunes than rhubarb does." Groucho

R- Reason to smile: I like my new haircut

T- Things you are worrying about right now: Money, my mom

U- Uninterested in: Dan Brown's books

V- Very scared of: Pennywise, the killer clown in IT 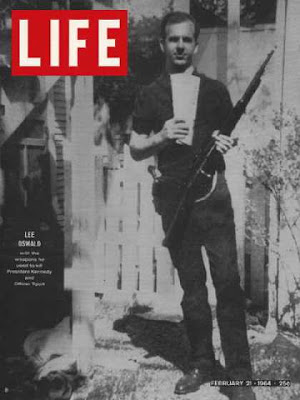 I'm in geek heaven, watching a History Channel documentary called JFK: 3 Shots that Changed America. This show replays the local and network news coverage of the President's assassination so I'm watching the story unfold the way most citizens did back then. And it's got me wondering, "if only."

When I play "if only" or "I wish," I purposely aim a little low. I don't want God to think I'm too greedy. Like when I buy my Lotto ticket, I don't hope to be the sole winner. I wouldn't complain if I have to share the $6.5 million with another ticketholder.

Likewise when I think about history and weave my "if only" about November, 1963, I don't wish that President Kennedy hadn't been taken. That's too much to even hope for. It was such a profound loss and it's arrogant to question God's will that much.

Instead I wish that Jack Ruby hadn't taken Lee Harvey Oswald out. First of all, I hate that the smirky, twisted little man you see here is now a historic figure of great and continuing interest. There are at least 12o books devoted to Oswald. He doesn't deserve all this attention -- he really doesn't. All he wanted was attention, to become famous. He expected to become legend by renouncing his citizenship and defecting to Russia. That didn't work. He shot at controversial Texas segregationist Edwin Walker, using the rifle shown in the cover shot, but he was stopped by the bullet-proof glass in Walker's living room. So then Oswald went to Plan C, and damn if he didn't finally get the attention he craved.

Because Ruby killed Oswald, he never stood trial. Some of the more pathetic aspects and motives of Oswald's life were never heard in open court. Because he disappeared from the scene so suddenly and with such violence and finality, the system didn't get to play out and Oswald takes on a mythic dimension. Some conspiracy theorists over the decades have turned this murderous twerp into a martyr, an innocent caught up in a web spun by powerful forces (the FBI, CIA, Castro or the Mob, take your pick).

P.S. Recognize this family? They are the Tippits. Officer J.D. Tippit was also shot by Oswald on 11/22/63. This poor man's reputation has taken quite a hit as conspiracies swirl. This family deserves better. Another reason I wish Oswald had lived to stand trial. 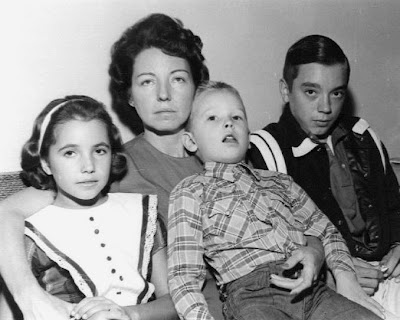 I'm 3/4 of the way through this long book and believe I have figured out who the murderer is. I am tempted to abandon it. The story -- as all Cornwell stories are -- is very dark. There are aspects that annoy the hell out of me. (Scarpetta, a 50-plus-year-old medical examiner, is somehow one of the biggest celebrities in the country and has become the focus of one of hottest Internet gossip sites; have Jen and Brangelina and Britney all suddenly fallen off the face of the earth?)

But no, I'll finish it. The murderer's motives still have to be revealed, and I need to know what happens to two of the supporting players -- Lucy and Marino. Cornwell has created a compelling domestic manqué and I want to see how all the relationships end up.
Posted by The Gal Herself at 10/17/2009 08:57:00 AM 3 comments: Links to this post

Saturday 9: Inside Job
1. When you were young, what did you want to be when you grew up? When I was really little,I wanted to be a teacher or a great singer.

2. Did you ever pursue that career? No and no.

3. If you are not in that field, what changed? a) I discovered I didn't enjoy school and b) I can't sing.

4. What is your current job? Associate Creative Director

5. What's the best part of what you do? Explaining how my efforts will move the client's business ahead

6. Do you have plans to do something else down the road? No. I enjoy my profession.

7. How did you get your present job? If you are a stay at home mom, how long did you need to plan that move? My friend and former coworker, Kathleen, worked here and convinced me to come on board.

8. Did your parents influence your choices of jobs over the years? Not at all.

9. What advice would you give your children on careers? That Mary Poppins was right: "In every job that must be done there is an element of fun." Pursue a career that provides you "an element of fun."
Posted by The Gal Herself at 10/17/2009 02:45:00 AM 5 comments: Links to this post