How I'm loving it! 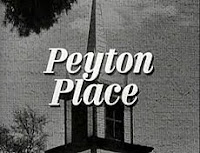 I got the complete set of DVDs, every episode of the original nighttime soap, Peyton Place. And I am completely enjoying it.

When I was a kid, it was like a radio play because when it was originally aired, I wasn't allowed to watch it. Forbidding it made it my little first grade obsession. The livingroom tv was pushed up against the wall, and on the other side of the wall was my bed. If I laid on my bed and stayed very still and quiet, I could make out most of the dialog. This was how I came to know the two sets of characters had inhabited this steamy New England town: The grown ups (Constance MacKenzie, Elliott Carson and his father, Leslie Harrington and my favorite, Dr. Rossi) and the young people (the Harrington brothers, Allison MacKenzie and beautiful bad girl Betty Anderson). Every time we went to the drugstore, I'd run to the magazine rack to see which Peyton Place stars were on the covers. That way I could examine their faces and then imagine them as they acted out their small town dramas on the other side of my wall.

By the second season, the ban had been lifted and I was able to watch with my parents. I'm surprised by how many of the storylines I still remember. Some of it is still new, but the love triangles (Rod/Betty/Allison and Constance/Elliott/Dr. Rossi and Rod/Betty/Steven) are as indelibly, intractably embedded on my brain as cement.

Of the grown ups in the cast, I loved Dr. Rossi most. I thought he had the kindest eyes and I remember him being forever unlucky in love. He was played by Ed Nelson (shown). I wouldn't say I had a crush on him -- that wouldn't be accurate. As a little girl, I saw him as the perfect doctor and confidante. The kind of grown up every girl longs to turn to and trust with her secrets.