I loves ya, Cigna!

$892.58. That's what I owe for my hysterectomy after insurance. I had estimated that I'd owe $2,000 or so. I'm not surprised that my estimate was so far off -- I've never been good with math -- but I am delighted. What I hadn't counted on was that my insurance company would pay 100% of certain charges because the hospital was "in network."

What a relief! My doctors' bill will come separately, I know. But I still have $1,100 that I'd earmarked for surgery that I can now use for that.

I am paraphrasing a story from Historic Conversations on Life with John Fitzgerald Kennedy by Jacqueline Kennedy and Michael Beschloss. I love it because it's so relevant and timeless in its themes -- there's no percentage in alienating people you might need later, the rich remain insensitive to the poor, and no one is every completely comfortable with their significant other's family. 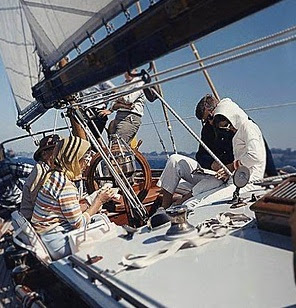 In 1960, while he was preparing for the Presidential debates with Richard Nixon, the Kennedys had dinner with her mother, Janet, and stepfather, Hugh Auchincloss. Hugh was a millionaire stockbroker who maintained several residences. Between his Wall Street firm and his households, Auchincloss employed quite a few people.

Over dinner, Hugh tried to persuade his son-in-law to back away from his support for a $1.25/hour minimum wage because it would be such a drain on the wealthy. Jackie didn't think her stepfather's comments made any impact on her husband at all, that it was just one topic in a meal filled with conversation.

She was wrong. Her husband was disgusted. He just put a placid face on it. Later that night Jackie recalled him saying, "Did you see your stepfather was putting a great slab of pate de foie gras on his toast while he called a $1.25 minimum wage 'appalling?' He was really shocked."

But even if you don't always get along, even if you are the most powerful man in the free world, your in-laws are still family. Here the Kennedys are, vacationing with the Auchinclosses, in September 1962.