It Had to Be Her 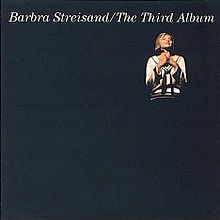 I've got Streisand's The Third Album in my headphones as I post this.

THIS IS THE NIGHT! I finally get to see the lady herself tonight at the United Center. She has been singing to me and for me since I discovered her back in the mid 1970s and I cannot wait. Fanny Brice and Katie Morosky, live and in person!

Nobody else gave me a thrill/with all your faults, I love you still/It had to be you ...

Nobody means to me exactly to me what she does. I couldn't be happier to live in one of the few cities she's appearing in.

I spent the better part of an hour arguing with "Wendy" from Met Life. Everything she told me today about my mother's policies was diametrically opposed to what I was told last month. By a different customer service rep reached through the same 800 number.

My lawyer warned me that Metropolitan Life is notoriously difficult to deal with. At first I didn't believe him, because the first round of conversations were so peaceful, helpful and informative. But it triggered a computer-generated form letter that contradicted much of what I'd been told over the phone.

And then I got "Wendy," who pretty much told me the first call could not have happened because giving out the information I was given isn't their procedure.

We're talking about $3500 here. I don't know how much sense it makes to get my lawyer involved, since he charges $250/hour.

Part of me is tempted to just blow it off, rather than enduring confrontational phone calls and launching a letter writing campaign.

Part of me is tempted to curl up in a fetal ball under my desk and hide.