Me and Dad and Frank

There's a game on Facebook where you tag a friend, asking him or her to share the 10 albums that had the greatest influence on their musical tastes. I'm an easy mark for such things, so when I was tagged, I complied. 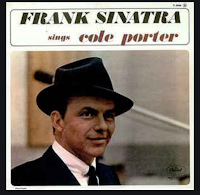 This was one of my choices.* In the post, I recalled how I picked it up from the "cutout" bin for less than $2, and it changed my life. Sinatra and Cole Porter: two authentic American geniuses.

My aunt responded to my post saying she remembered listening to my dad's copy of this album when I was still a toddler and she babysat me.

Huh? I was still living at home when I bought this! He must have heard Francis' silky tones through my door. After all, he complained (at least) daily that I played my records too loud.

I remember my dad as mostly mad. Angry at "them." The hippies who won't bathe. The welfare scammers who won't work. The blacks who want "too much, too soon." The libbers who want to be men. The liberals who run the media and led the conspiracy to "get" Nixon.

He lectured. He growled. He harrumphed. I couldn't even enjoy a Cub game with him because he'd fixate on the fumbled double play, innings after it happened.

So my aunt's comment made me sad. Wouldn't it have been nice if my dad and I could have talked about what made Sinatra and Cole Porter so enduring and so great? That would have been a nice memory.

*This wasn't the cover of the LP I had. Mine was peach and featured a line art portrait of Sinatra.

I wonder which is more tiring.

Ignorance or paranoia? Now the live-free-or-die, fight-the-tyranny, I-blame-Obama's-deep-state crowd is questioning why states are "suddenly" seeing a spike in corona virus cases.

West Virginia, Pennsylvania, South Dakota, Florida, Kentucky*, Michigan* and Illinois (maybe more) have all seen increases, just as some states have begun loosening the restrictions designed to keep all of us -- especially first responders and hospital workers -- safe. (Or, in their alternate universe, to keep them from buying guns and ammo.)

Coincidence? No. Of course not.

•  The epicenter of the disease is moving, just as scientists always predicted it would.
•  It takes up to two weeks for symptoms to appear, so these "sudden" cases really aren't so "sudden" at all and have more to do with exposure than with any governor's decision to lift restrictions.
•  More tests are FINALLY fucking available! More tests just naturally mean more positive diagnoses.

Or maybe it's just a concentrated plot, orchestrated by this man, to stomp on their individual rights and keep them from buying guns and ammo.

I'd find it funny if these it weren't for the fact that an outbreak anywhere is an outbreak everywhere. Our society is mobile. An infected asymptomatic person unknowingly shares the virus with someone who shares it with someone who takes to the highway, goes to the beach, travels across country and ... And I don't want to die. I don't even want these crazies to die.

They're also offensive. Your country is asking you to do one thing for the greater good: Stay home.

I vote. I volunteer in elections. I write to my elected officials. I don't bitch and complain about airport safety procedures. I pray. But this is the first time my country has asked me to take it on the chin in a real way to help my nation stay strong.

Even though the President asking me is a congenital liar, I'm doing it. Because Donald Trump is just one man, he's not America. My country needs me to do this.

Can you just imagine these selfish crazies during WWII?

"Hawaii is so far away! It's not even a state! The Japanese won't hit us here in New York!"

"Grow my own vegetables? Victory garden? Are you kidding? Don't you tell me what to do with my yard!"

"Ration stamps? Today they're limiting our meat and coffee. Tomorrow it will be our guns and ammo. Wake up! Don't be a sheeple!"

"FDR is a cultural elite! A socialist! This is all just a plot to redistribute wealth, and keep me from buying guns and ammo."

"What Hitler does is Germany's business."

Were Americans like the live-free-or-die, fight-the-tyranny, I-blame-Obama's-deep-state crowd living then, today I'd be closing my posts like this --