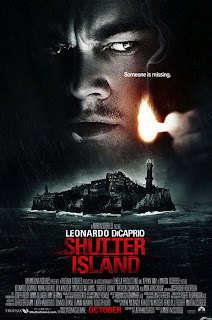 ... I figured Shutter Island out pretty early on, and that kinda spoiled the creepy, scary fun the rest of the audience was having. Damn! I was looking forward to this one, too.
Posted by The Gal Herself at 3/06/2010 09:18:00 PM 2 comments: 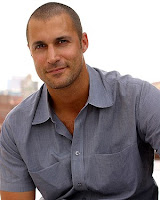 Nigel is actually shooting the contestants on this episode of America's Next Top Model. If that weren't enough, he's shooting them in the pool so he's wearing a wet suit! What was originally intended as background noise* as I race around, getting ready for a productive Saturday, stopped me completely in my tracks.

1. No matter what's going on in your life, what always makes you smile? The color of the sky. The Chicago River. The song "September" by Earth, Wind and Fire.

2. What's the biggest lie you've ever told? God, it's hard to believe this was ever a big deal at all, but at the time, it really was: When I was in high school, I told my parents and sister that I was my English teacher's favorite student and that he helped me after class. It wasn't true -- I didn't need help after class; English was one of my few easy A's. But I wanted my parents to think he was great so my dad wouldn't embarrass me at the school open house by commenting on my teacher's unconventional appearance. I forgot two things: (1) My parents were going to meet and talk to him at the open house and (2) my older sister had him in a class, too. I spent a sleepless night or two, worried that my lie would be found out. It wasn't. I forgot that my dad's bark was worse than his bite and he didn't even speak to my teacher at the open house, and that my sister was too competitive with me to even acknowledge our familial relationship in her class.

3. Do you hold a grudge? Yes. If it had been a competition in Vancouver, I'd be wearing gold right now.

4. What is the worst job you've ever had? Copywriter at a software engineering company. I had no idea what I was doing and quit after six months. Shhh! I never included it in my rez.

5. What would be your dream job? Sometimes I really want to be a pet sitter.

6. What is the happiest event you've experienced? When my niece was little, she was obsessed with the animated Anastasia. She had a dream where she walked into an Anastasia store where she could purchase everything Anastasia for $100, and she had exactly $100 in her purse. I went on eBay and purchased Anastasia memorabilia from all over the world (my favorite: plastic Anasastia medallions that had been packaged in cereal boxes in Ireland). I spread them out all over my apartment and put a sign on the front door: Anastasia Store -- Everything $100. The look on her face when she came in the door, the way she clasped her hands together under her chin and looked around the room in wonderment at the Anastasia dolls and books and puzzles and pillowcase, etc. ... I'll never forget it. How often in life do you get to make someone's dream come true?

7. What is the saddest thing you've experienced? After the 2004 Presidential election, I had to put my cat Billy to sleep because he had bone cancer. It was shattering. I had worked very hard on Senator Kerry's campaign for nearly a year and could not believe the nation had rejected him. Then there was Billy, sweet Billy, who deserved never to suffer because he was such a sensitive, melancholy spirit. It felt like, during those few days, the entire world was dark and bleak and completely wrong. There was hardly anywhere I could turn that provided relief. Except my best friend. That's when we first bonded. He was completely there for me and spoke to me for hours. In case you wondered why I care so much about that relationship, it's because he's the only one in my life who understood (or tried to understand) why watching the Ohio results come in while knowing what I faced with poor, weak Billy, was my personal nadir.

8. Do you tend to exaggerate or underestimate? Exaggerate. During times of stress at work I have been known to say, " ... and we'll miss our due date and Christmas will be cancelled and we'll all die." I suppose that's a slight exaggeration.