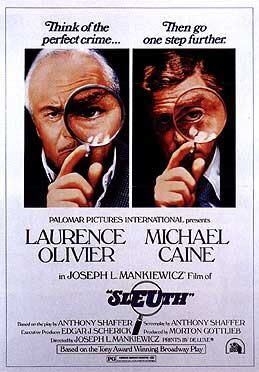 I have been watching Sleuth (1972) rather obsessively since I accidentally happened upon it more than a week ago. I'm struck by what a well constructed movie it is. The sets, wardrobe, and score are all top rate. The direction, by Joseph Mankiewicz, is smart and skillful. Old Joe took what was originally a two-character stage play and artfully opened it so it never feels claustrophobic, as other films based on plays often do. (Like Death Trap.)

Best of all, it's got Michael Caine and Lord Laurence Olivier. Especially Michael Caine. Of course Olivier was good. By the 1970s, he was regularly acclaimed as England's best living actor. He's having a ball here. 65 by the time he made this movie, he seemed to relish doing something light and contemporary. He slips in and out of accents with a speed and dexterity that would make Meryl Streep drool. 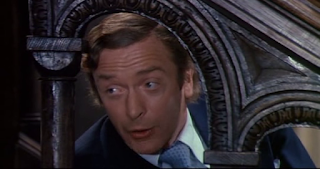 But the one I can't take my eyes off of is Michael Caine. He has the less showy role, yet he brings such dimension to it. His Milo has accomplished a lot but wants so much more, and that longing practically comes out of his pores. There's also an unforced sexual energy to him, subtle but important because we have to believe the woman they both love would willingly walk away from the most comfortable life Olivier has given her. His joy and delight are infectious, as well. Next time you catch this movie, play close attention to his scenes as Joey the Clown. The was he laughs and dances, you want to go to the circus with him.

"I didn't know until today it was Barzini all along."
"Monday, Tuesday, Thursday, Wednesday ..."
"Leave the gun. Take the cannoli."
"Make him an offer he can't refuse."

Yes, 1972 was the year of The Godfather. Sleuth had the bad fortune of being a fine movie released the same year as an American phenomenon. This was the year that Marlon Brando won his comeback Oscar but didn't accept it. He famously sent Sacheen Littlefeather to reject it on his behalf.

Don't feel too sorry for Michael and Larry. They eventually each got to adorn their mantles with a pair of Oscars. And the awards apparently made them happier than they made Brando.