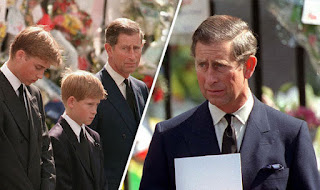 My all-time idol, JBKO, rather cannily observed that, "People like to believe in fairytales." I admit I'm one of those people. And that's why I find these photos so enormously touching.

Here you see Prince Charles and his sons at Diana's funeral. By now Diana and Charles had been long separated and officially divorced. He had returned to the woman Diana believed he never left. She had been involved with James Hewitt, Hasnat Khan, and Dodi Fayed. The rancor between Prince and Princess had abated. It's almost as though space had afforded them the luxury of civility. They spoke often about parenting -- they both loved their boys -- and schedules and royal engagements.

It would be easy to assume that when these photos were taken, Charles' overriding emotion was concern. He was, of course, worried about his sons. He knew he had an official role to perform and he wanted to deserve the respect of his subjects. And I'd believe concern was all that's going on here if not for one thing: 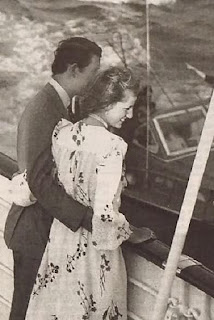 This most hidebound of men certainly knew that Royals wear black and only black for mourning. He owned a black Savile Row suit custom-made for such occasions. But his sons knew he wore the blue suit in tribute to their mother. Diana always told Charles she liked him best in blue.

I want to believe that this Prince understood and respected that he was 19-year-old Diana Spencer's First Love. I just finished a new biography of Prince Charles and it details, excruciatingly, the warfare between husband and wife. The author, clearly pro-Prince, wants us to take sides in the War of the Waleses. I refuse. 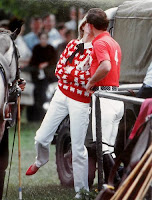 The blue suit tells me that he knew she loved him and that, once upon a time, he loved her, too. That they were happy once. Yes, their marriage was doomed from the start. But isn't it possible for even epically incompatible people to be in love, at least for a time?

This old Gal really wants to believe that.