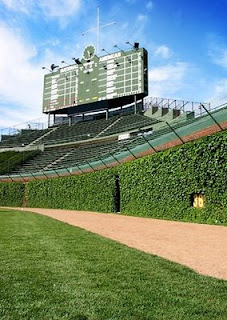 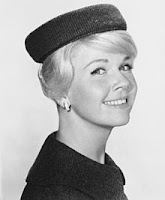 Yesterday was Doris Day's 88th birthday. I have always been a big fan of hers, and don't know why there aren't more of us. Not only did she make some wonderful movies and recordings, she was a major star for years. Between 1956 and 1965, she never ranked lower than #3 on the list of female box office draws, and for four of those years, she was #1. While sex goddesses Elizabeth Taylor and Marilyn Monroe are remembered as the icons of that era, it was freckle-faced Doris who consistently sold more tickets.

I love her because she never seems to be acting. She had her share of leading man who were adept at chewing the scenery (Kirk Douglas, Howard Keel) but she never succumbed and always stayed utterly natural. Which is not to say she wasn't charismatic. In two of my favorite movies (Young at Heart and Love Me or Leave Me), she holds her own with Frank Sinatra and James Cagney. She also enjoyed success with Cary Grant and Clark Gable (though, to be honest, I wasn't as enamored of her in those roles).

The quintessential Doris heroine was high-spirited and good-hearted. She was always independent and sure of herself. A pre-feminism feminist. Marilyn Monroe may have always needed rescuing, but not Doris. In fact, she was just as likely to do the rescuing. (In Young at Heart, she saves both an unwanted puppy and Frank Sinatra.)

She is best remembered for her wildly successful but virtually sexless sex comedies with Rock Hudson. The plots are all so dated, as Rock tries to maneuver Doris into bed and then she gets so mad! It's easy to make fun of them. After all, by the time she made Pillow Talk and Lover, Come Back she was already in her mid-30s, a little old to be a virgin. But I never thought it was her purity that Doris was fighting to protect. It was her integrity. It wasn't Rock's single minded horniness that upset her as much as his duplicity. Plus she had some really fantastic clothes in these movies. In Pillow Talk she's an interior designer and in Lover, Come Back she's an ad exec, so she has high-powered jobs to pay for those designer threads, too. And, while there isn't really much heat between her and Rock in these silly comedies, there is a lot of genuine affection. 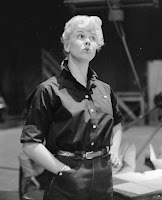 She began her career as a singer. "Que Sera, Sera" is her signature song, introduced in the Hitchcock classic, The Man Who Knew Too Much. But in the 1940s she reached audiences not from the movie screen but through their radios. Singing with bandleaders Tommy Dorsey and Les Brown, she had hits with "I Got the Sun in the Mornin'," "Everybody Loves a Lover" and, most famous of all "Sentimental Journey." The latter was an anthem for servicemen in WWII, and Doris a stand-in for every Girl Next Door waiting faithfully back home. It was so popular, and her vocal was so good, that it was the first recording inducted into the Grammy Hall of Fame. Her singing was just as natural, sweet and affecting as her acting. None of the histrionics that we hear from divas today. Doris simply hit the notes squarely and told a story as she sang, and she did it beautifully.

When her movies and music fell out of favor, she ended up doing a TV show that, while popular for a time, truly sucks and is better off forgotten. Then she indulged her passion for animals and became a tireless crusader for animal rights. Her Doris Day Animal League focuses on influencing legislators to introduce new laws and enforce existing statutes that protect animals. They work hard to bring animal welfare organizations from different regions together to compare notes and develop innovative ways to educate the public and reduce animal suffering. Naturally, I think the old girl is a peach.

Her personal life has been chaotic. A terrible car accident as a girl, an abusive first husband, a manager-husband who robbed her, a landmark lawsuit that awarded her $22 million, and a son who offended Charles Manson. She wrote it all in her 1975 autobiography, which raised quite a few eyebrows at the time. Being Doris Day was most certainly not as easy as it looked!

Which is why I hope yesterday was a very happy celebration for her. No one sees her very much these days, which isn't an unusual for a lady of her years. I hope at 88 she's healthy and surrounded by loved ones (with and without fur). It's the least she deserves for all the joy she brought us for decades. 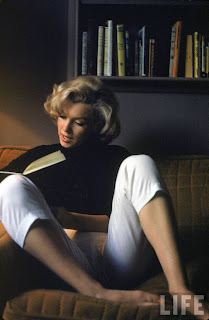 • What are you currently reading? I just picked up  The Spellman Files by Lisa Lutz. It's Book #1 in a detective series about Izzy Spellman, who is described as "part Nancy Drew, part Dirty Harry." This series gets a "thumbs up" from Kwizgiver.

• What did you recently finish reading? Mortal Stakes, my favorite in Robert Parker's venerable Spenser series. I picked it up again because it's about a mystery surrounding a phenomenal young Red Sox pitcher, and my Cubs begin their season tomorrow and I wanted to read about baseball. The title comes from Robert Frost, "Only where love and need are one, and the work is play for mortal stakes, is the deed ever really done." That's just one of its serious elements. There's mystery and blackmail and bribes and sleuthing, for sure. But also integrity and values. How what you care about helps determine who you are. It shows Spenser falling slowly in love with Susan, his life partner and (for me, at least) one of the most annoying women in pop culture. So it was good to revisit Spenser and Susan at the beginning of their relationship, to remind me what he loved about her. (PS This book was originally published in 1987. The Internet has changed our lives soooo much in the last 25 years, and as I reread it I kept thinking, "This wouldn't have happened this way if they'd had Google.")

• What do you think you’ll read next? I don't know for sure, but maybe Found by Tatum O'Neal. She's been through so much, and so publicly. I'm curious about how she's doing -- as an actress, as a daughter and as a mother.

I want today to be over. For it feels like tomorrow, the rest of my life begins. After all, Thursday is Opening Day! I'm always happier when I have my Cubs.

Then there's Easter and my vacation, which begins Monday. The sooner today is over, the sooner the fun starts.