She likes cowboys, too

So this morning, as I got ready for work, I watched an episode of Bonanza on my little Philips DVD player. It was on the floor, right outside the bathroom, where I could hear/glance at it as I put on my makeup.

This is the scene my cat Connie came to watch. And she watched it most intensely, but from a strange angle. She was behind the screen, peering over it. 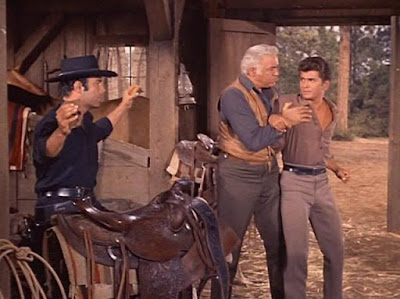 I don't think she liked that the two best-looking Cartwrights were at odds. Once the scene was over, she went about her usual morning routine of searching for breadbag ties and balls with bells in the middle.

Today I was happy to sip a can of beer on the train home. I worked late and was very productive today, so I deserved it. Good for me!

If you want to play along, just come back here (meaning to this blog, not this individual post) each day in August, looking for the happy chocolate cone. Every day I will try to have a post with the headline: August Happiness Challenge: Day [X]. Leave a comment and then post your own daily happiness, with August Happiness Challenge in the title to make it easy to find.
Posted by The Gal Herself at 8/06/2015 12:54:00 AM 2 comments:

It's as though she never left 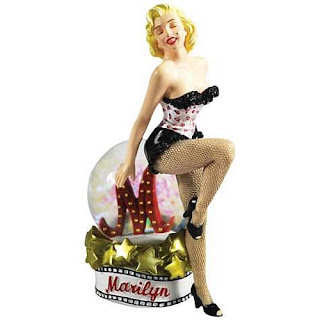 Marilyn Monroe died 53 years ago on August 5, 1962. She was 36 years old. At the time of her passing, her career had hit a slump. She hadn't had a major hit in years, and was no longer among the year's Top 10 Box Office Stars, having been replaced in the glamour department and the headlines by Elizabeth Taylor. While gossip had her seeing everyone from Joe DiMaggio to Frank Sinatra to the President, Marilyn was found alone in her tiny bedroom, pills on the nightstand,  the telephone receiver in her lifeless hand.

Hollywood never much respected her. In real-time, that is. Back in 1962, La Liz had just won her first Oscar with her fourth nomination. Never-nominated Marilyn had just been fired from Something's Got to Give. Monroe and Taylor were both working for 20th Century Fox at the time, and Fox was doing absolutely everything it could to make Liz happy on the set of the blockbuster Cleopatra. Marilyn they canned, blaming her for the cost overruns on her little rom-com. With Cleopatra, Fox made Liz the first actress ever to make $1,000,000. Marilyn was making $100,000. 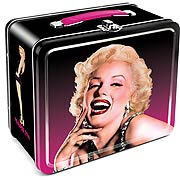 Yet today, she personifies Hollywood. Marilyn is big business. According to Forbes, her image generated $27 million last year. You can get officially licensed Marilyn snowglobes, ornaments, wrapping paper, handbags, lunchboxes and throw pillows.

I wonder how she'd feel about being ubiquitous. I'm sure that the fatherless child, the mousy brunette who craved attention, would be thrilled to be recognized and adored as an icon. But what about the actress who studied tirelessly with Lee Strasburg and dreamed of the classics, even as producers gave her dreck like Let's Make Love? Her movies aren't cable staples, the way Elizabeth Taylor's, James Dean's and even Elvis' are. Wouldn't she prefer to be known for her work than her cleavage, red lips and platinum do?

A natural, gifted comedienne, she was often as witty as she was sad. It's that touching combination that has earned her a place in my heart. And so I'm closing this post with the lady's own words.