Running on a continuous loop

I can't help it. The classic movie lover in me kept thinking of this as I watched the Bidens march up Pennsylvania Avenue. I even caught myself singing it into my refrigerator as I contemplated what I'd have for lunch. 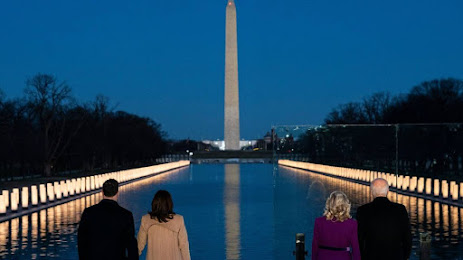 Those lights on the reflecting pool memorialize the 400,000 dead of the coronavirus. 400,000 of our fellow Americans. According to the VA, 405,000 American servicemen died in WWII. That was between 1941 and 1945. We're still dying of covid at this startling rate without yet hitting the one-year anniversary.

This country is not, as former President Trump kept insisting, "rounding the corner." We are in the thick of it. We are suffering. We are dying. To paraphrase Illinois' governor, we're losing both our lives and our livelihoods.

Until this week, I've been scared and angry. "Rounding the corner," my ass! My guts were water, I was unable to work, I had a bloody rash on my ankle ... this went on for more than a month! Beginning in December. When my community was facing record case numbers and my President was diminishing me in his zeal to convince us all that he deserved to stay in office even after he lost the election.

My oldest friend in SoCal was suffering from it at the same time. Her case was not as severe as mine, but that's in no way a complaint! She is a diabetic and a heart patient. People with her underlying conditions die from this. Like me, she was part of the post-Thanksgiving surge. I wonder how many people had conventional family get-togethers because they assumed their President was telling them the truth about "rounding the corner."

I just found out that my Cousin Rose, who lives near Tampa, received her corona virus diagnosis on Christmas Eve. Her letter reports that she is on the mend, but she is 70+ years old and lives alone. She admits she was terrified. For the first time in her life, she had to depend on others for help ... and while her much loved grandnephew pitched in with grocery and drugstore runs, she was unable to let him in. The sense of vulnerability remains with her as she recovers. And, I cannot emphasize this enough, my Cousin Rose has always been one of the most independent women I've ever known. She was a geography teacher until she was in her mid-30s and spent every summer vacation on the road, traveling first the country and Puerto Rico and then the world (specifically Mexico and Guatemala) and then convincing her bosses to allow her to change her lesson plan so she could use her slides. The corona virus has robbed her, at least for now, of her feisty sense of self.

A friend lost her great aunt to the corona virus. Another friend lost her father. Yes, Auntie was in her 90s and Dad was in his 80s. But they were unable to have the traditional funeral services that would have salved their souls.

So I've been mad. Furious. With nowhere to put my anger. Oh, I've prayed. I have let the Lord know I am grateful that I can still work from home, that I have a good doctor, that I am lucky enough to live in Chicagoland, where I received prompt attention from the healthcare system and support from local government.

But I hadn't cried. When I saw this memorial, I welled up. I was overwhelmed by how much I felt beyond the fear and anger. I miss going downtown. I miss seeing my friends. I miss going to the movies. I miss my life. I am sick of selfish dumb asses who are antivax and antimask and are willing to risk the nation's health and strength over a misconceived political spat.*

I am tired of this pandemic. Right through to my bone marrow. And I see it isn't over and we all have be stronger longer, even as we are tired. 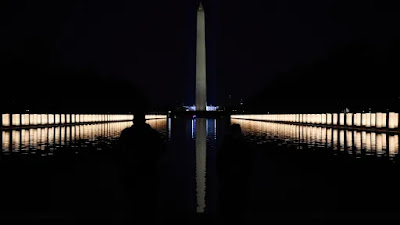 My weariness is garden variety. I know my feelings are shared by millions upon millions of my fellow Americans, many of whom have suffered far more than I have. Knowing that the exhaustion is pervasive doesn't help.

But crying did. Mourning did. Acknowledging pain and hurt but then continuing on doesn't make us weak. In fact, it's made this gal stronger in a way that pretending we're "rounding the corner" never could. I am facing the next few months with a more peaceful outlook, because I was able to turn my rage into pain and then really acknowledge it. Honor it.

*Why aren't they offended by "No shirt, no shoes, no service" signs? Because Q wears a shirt? What fools!