Happy Mother's Day to Me 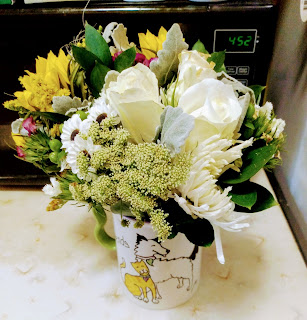 This morning, an Amazon/Whole Foods mini bouquet arrived. It is a Mother's Day present from my fur babies, Connie and Reynaldo. My oldest friend said the cats chose my gift but asked her for her credit card number.

It was a lovely, thoughtful thing to do. This is the kind of friend she is when she's on her game.

I must remember that. She's bipolar and doing the best she can. I have to try not to let her hurt me because it's not her, it's her condition. And she can only hurt me because I love her so.

This week in Rizz

I've been really stressed with work this week. (You know what I know less about than cars? Running my own car care franchise!) Much research was required to do a good job for the client, and I didn't have much time.

I did, however, have Anthony Rizzo to keep me company. My favorite-most Cub had quite the entertaining week. I enjoyed having him on in the background, and wonder what people who don't love baseball do for respite and relief.

First the Reds Amir Garrett struck him out. Fair enough. It happens. But Garrett beat on his chest and kept taunting Rizz as he walked back to the dugout. Rizz gave him a look I'm not familiar with. It's as though when Garrett yelled, "I'm a bad motherfucker," Rizz was thinking, "Why yes, yes you are, Amir." 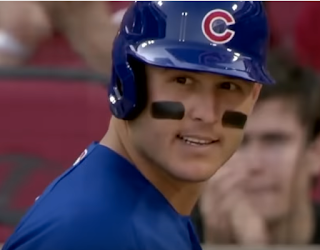 The core of this Cub team has been together for a while and they're a tight unit. By the time Rizz made it back to the dugout, Javier Baez was on the field, charging Garrett and letting him know how he felt about the way Rizzo had been unnecessarily disrespected. It's good to know that gesture means the same in Javy's hometown of Bayamon, Puerto Rico, as it does in Amir's birthplace of Victorville, California. 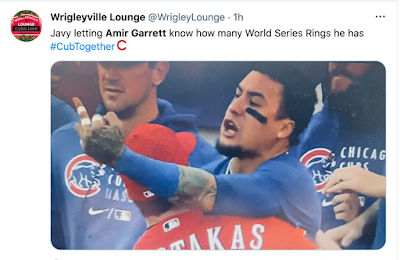 The benches cleared. No one was ejected in the fracas, but the league fined Javy and suspended Garrett for 7 games, so clearly they were offended by the way the Reds pitcher behaved. Bravo!

Then the Cubs welcomed the Dodgers to Wrigley Field. Los Angeles is confusing, because on paper they are a great team (much better than the Cubs) but on the field they are struggling. My guys were ready for them.

Now Rizz is strong with a bat. He's an award-winning first baseman who can stretch and leap to get a runner out. Lacking among his skills, though, is speed when he runs. At 6'3 and 240-245 lbs., he's a big guy who most decidedly does not move like a gazelle.

So when he raced desperately to stretch a double into a triple, he looked ... well ... stupid. This is the most inelegant slide I've seen in a very long time, but I loved him so for trying (and succeeding). 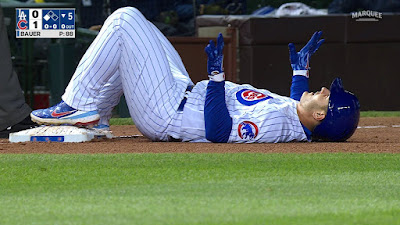 Then there was last night. He was supposed to have Wednesday off. He'd appeared in all 30 games so far this season and it's been chilly here lately. Cold weather can cause his back to tighten. So Manager David Ross decided to give Rizz a little bench time.

Except this last game of the Dodger series went into extra innings. Ross decided the team needed the Big Guy after all. He came off the bench and got the winning hit. How fitting that the Los Angeles Dodgers were treated to a Hollywood ending, starring #44 Anthony Rizzo. 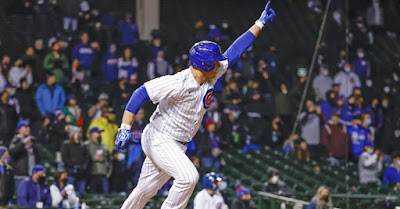 I live in terror that will be our last season together. I want to enjoy every moment with Rizz that I can.