Not him. Not now.

Ok, let's be real. There's NEVER an acceptable time for anything bad to happen to #44. And yet today, Anthony Rizzo went down. He'd been so happy in the lead off position. He'd gotten on base twice, with walks! Then in the third, this happened. Look at his ankle. It's called a "lateral inversion sprain." Or, in human speak, it means he rolled his ankle.


The good news is that the ankle is NOT broken. Sprains are less serious, but harder to predict. And he's undoubtedly suffering bruising, swelling and pain.

Rizzo deserves better from The Baseball Gods. Just last Friday,  he invited pediatric cancer survivors onto the field. That's young Ethan, currently in remission, who got to throw out the first pitch. 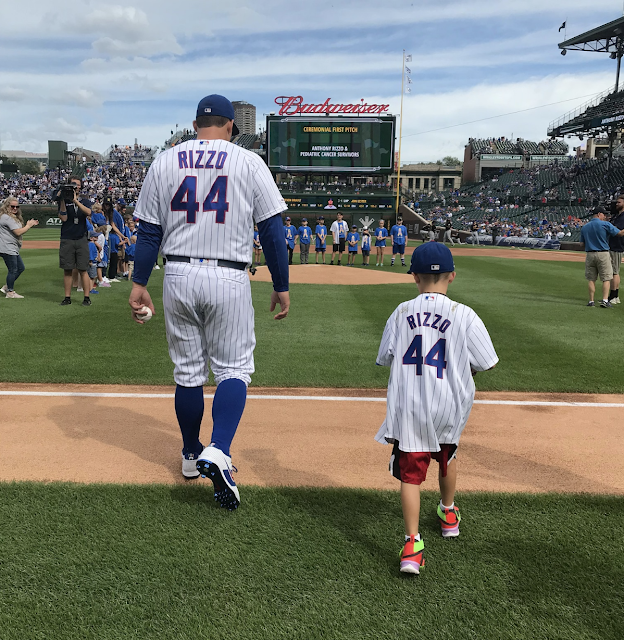 Get well, Rizzo! You deserve only good things!

My flirter is fixed!

I don't like what I see in the mirror first thing in the morning. My hair has grown thinner with time, yet it is still as independent and spiky as ever. My face looks ruddy, fat and, worse, puffy around the eyes. While I look better after shower and shampoo and makeup, I still go back to that first look in the mirror and can't help thinking, "No one would want to wake up to this!"

This has made me self conscious with men within my dating range. I don't engage with new men in social settings and am grateful when I seem to be invisible.

Which is why I am so surprised by Paul, director of the local library book sale. He went out of his way to engage me in conversation when I was volunteering, and he thanked me for my work on the last day, adding that he hoped I would attend the potluck dinner when results of the sale were shared.* I thought he was paying more attention to me than he did to other volunteers, but then again, I didn't see him with everyone.

No, he was flirting with me. I attended the volunteer dinner this past week and yes, again he was making eye contact with me as he was addressing us, using me as his barometer to see if his jokes went over. And on the way out, he gave me a prize. A bottle of bubble bath donated by a local Avon representative.  I didn't log the most hours. I was neither the youngest nor the oldest volunteer. I didn't even win the raffle. He just wanted another opportunity to talk to me.

I won't see him until next year. That's not really important. It's the idea that an attractive man would want to talk me that gives me confidence.