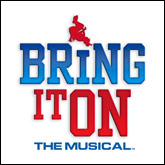 Saw the pre-Broadway try out of Bring It On: The Musical. While it's hardly high art -- imagine All About Eve set not on Broadway but in the hall of fictional Truman High School, and the prize at stake not a Tony Award but a 3-ft. tall monstrosity with a megaphone on top -- it was a lot of fun.

The theater was only about half full, and my friend Barb and I found ourselves surrounded by families and cheerleading squads. I must say it was almost as fun to watch the young girls as it was the play. Taylor Louderman, who played tall and strong blonde heroine Campbell Davis, got an enthusiastic standing ovation from the under 20 crowd. Fluffy as the show was, a girl of an impressionable age could have a worse role model.

As we sweat through the hottest March in Chicago history, there is something to celebrate.

I just happened upon it last night on my way to dinner and a play. While as the announcer explains, Puppet Bike is about as low tech an entertainment as you'll find, it's always such a welcome surprise to turn a corner, see a crowd assembled and find it's these ratty old puppets doing their thing under a little disco ball.