This week's challenge: Give us the 33 words that follow this illustration. What happens next?

From Mike to Big to Peter 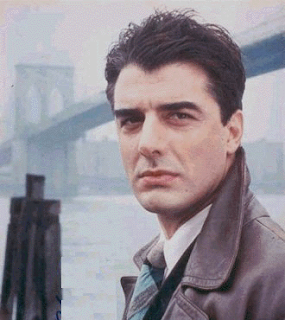 Watching a vintage episode of Law & Order and am happy to see Chris Noth as Mike Logan. His streetwise, proudly Irish Catholic and so-hot-he's-cool cop has always been one of my favorites.

In addition to Logan, he's been Big, Carrie's one true love on Sex and the City. Though they were both New Yorkers, Mike Logan would have been contemptuous of Big's "go first class or don't go at all" mentality, whereas Big would probably walk right past Nolan without noticing him.

I keep meaning to watch The Good Wife, Noth's latest show. I know his Peter is a quintessential Cook County politician -- which means, unfortunately, that he has a parole officer.

It occurs to me that with that track record, Noth has worked regularly and appeared in our living rooms almost nonstop for more than 20 years. I bet more people have seen his work than Brad Pitt's, and yet Pitt is considered a bigger star. Certainly Brad is a more attractive gossip/paparazzi target.

I think if I was an actor, I'd prefer a career like Noth's. He's known for his characters, not his private life.

I hate it when this happens!

I closed my eyes for just a minute ... and woke up TWO AND A HALF HOURS LATER!

I'm upset because I feel like I'm wasting my life, and because when I woke up I realized I missed both The Daily Show and Colbert, and was stuck with Tosh.0. I hate Tosh.0. Seems that that kid never met a rape joke he didn't like.

It was an exhausting day at work because we really weren't busy. We're in a holding pattern, waiting for the BIG, MAJOR PROJECTS to kick off. And then there was the unfortunate incident in the Capital.When something like that happens, I really should turn away from the computer screen. I worry, I fixate, I exhaust myself ... and it's all for naught.