Because Heaven is filled with Cub fans

I saw this video this morning and started to cry. And I'm not a crier.

But here's the thing. My dad was an unhappy man. Nothing brought him joy. But he did, in his way, love the Cubs. He was a passionate fan and often tried to get me to keep score old school (Pitcher 1, Catcher 2, First base 3 ...). He took me to my first Cub game. My introduction to the bricks and ivy of The Friendly Confines happened with him.

Both my paternal grandparents were massive Cub fans. Grandpa taught me to appreciate the moments -- a good catch in the outfield, an impressive duel between pitcher and batter -- more than the final score. Grandma looooooved Ryne Sandberg. To her 88th year, she wore Sandberg's jersey every summer. I have that jersey now, and intend to wear it myself if there's a Cub victory parade.

My mom's baby brother, my Uncle Ted, was a Cub fan, too. At the end of his life, when all his energy went to battling the Parkinson's that ravaged his body, he let all his magazine subscriptions lapse except two -- Mad and Vine Line, the official publication of the Cubs. (That really tells you what you need to know about Ted.)

When I was a little girl, I learned to love my heroes in Cubbie blue from these people. I wish there were here to see this team, this manager, this playoff run.

We now lead the series 3-2. We're coming home to The Friendly Confines just one win away from the World Series.

I'm not sure I believe this is really happening. But, oh! How I love it! 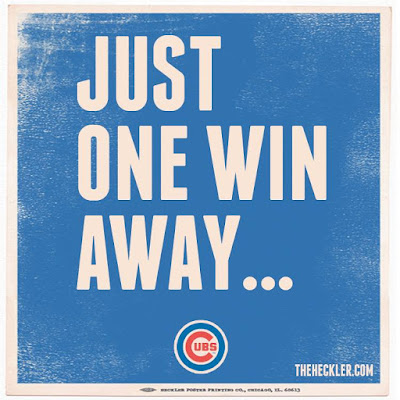