Chosen because January 8 is the anniversary of Elvis Presley's birth.

1) In this song, Elvis shares quite a list of maladies: he's itching, his hands are shaky, his knees are weak, he has chills ... How are you feeling this morning? My gut is still rather reactionary, but that's the last remnant of my battle with the corona virus.

2) He also mentions being "tongue tied." The dictionary defines it as, "unable to speak freely, as from shyness." Do you often find yourself tongue tied? Never. I'm naturally blabby.
3) Even after he was wealthy, Elvis never lived away from his parents. At one point Graceland Mansion was home to four generations of the family: his grandmother, his father and stepmother, Elvis, his wife and daughter. Have you ever lived in a multi-generational household? No.

4) Thinking of family, Elvis Presley was a distant cousin of President Jimmy Carter. Both of their family trees can be traced back to the 18th century and Thomas Preslar (before the surname was changed to Presley in the early 1800s). Have you traced your ancestry? If not, is it something you'd like to do? No. To be honest, I don't much care. It's a passion of my Cousin Rose's, and I love listening to her discuss it because of her joy and enthusiasm. But for myself? Eh.
5) As an adult, Elvis never wore denim (except for a movie role). That's because when he was in school, his classmates teased him for "dressing poor" in jeans and coveralls. Is denim a big part of your wardrobe today?

I don't think a week's gone by in the last 50 years that I haven't worn jeans. For a long time, I was an Old Navy girl. Now that I'm a portly old lady, my brand of choice is "Amanda" by Gloria Vanderbilt.

6) Before becoming famous, Elvis drove a truck in and around Memphis. Have you ever had a job that kept you behind the wheel most of the day? Nope. 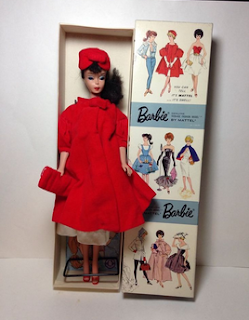 7) In 1957, the year this song was a hit, the Allstate Mechanical Freight Set was popular, too. Kids would wind up the engine and watch it pull two cars and a caboose around the track. To enhance the realism, sparks would shoot from the engine's smoke stack as it rumbled by. Did you ever play with a toy train? If not, tell us about a childhood plaything you remember fondly. My grandparents had a train around their Christmas tree, so I played with that one every holiday season. But Barbie was a real favorite. She and I were great pals. We had such glamorous adventures.

8) The best-selling book of 1957 was Peyton Place, a scandalous tale of life in a small New England town. Do you suppose there are enough steamy stories behind closed doors in your town to fill a novel? Yes. And I bet there are in your town, too.

Today would be Elvis' 86th birthday. It's Friday. I'm weary from a busy week at work and a sad and sorry week in Donald Trump's America. I want it to be 12:01 PM on January 20. I'm tired of being tired and afraid.

And so I turn to The King. I'm watching King Creole again. It's cinematic mac and cheese, and I feel warm and happy. Thank you, Your Highness.