After enduring four years of a President exploiting our differences, I'm honoring the eloquence of a leader who reminded us of what we share.

"Our most basic common link is that we all inhabit this same planet. We all breathe the same air. We all cherish our children's future. And we are all mortal."

"Let us not be petty when our cause is so great. Let us not quarrel amongst ourselves when our Nation's future is at stake. Let us stand together with renewed confidence in our cause – united in our heritage of the past and our hopes for the future – and determined that this land we love shall lead all mankind into new frontiers of peace and abundance."

1. What are you currently reading? JFK: Coming of Age in the American Century, 1917-1956 by Frederik Logevall. This is Volume 1 of what promises to be a comprehensive biography of President Kennedy. As of today I'm with him in high school at Choate. So much has already been written about the rivalry between the two oldest Kennedy boys, Joe Jr. and Jack, and how the parents clearly favored and extravagantly believed in Joe. (There's a telling passage in this book where, when Rose is shown evidence that her second son has a higher IQ than her eldest, she just dismissively says she doesn't believe it.)
What Logevall makes clear is that the rivalry didn't so much damage the future President as shape him. The attention and pressure his parents put on Joe gave him room to develop his own personality, to become the most original character in the clan. The humor, insouciance, creativity and detachment that President Kennedy would display on the world stage seem to have flourished during an adolescence of benign neglect.
So far this book is serious but not dry or scholarly. I'm grateful for that. So much published about the Kennedys is, well, crap. Even QAnon feels the need to drag them into murky conspiracy theories to ennoble their tripe. But this book is refreshingly anchored in objectivity, context and fact. I'm sure I'll have more to say about it next week.

2. What did you recently finish reading? A Night to Remember by Walter Lord. The night in question begins before midnight on April 14, 1912. That's when Titanic's lookout spotted the iceberg. It ends about five hours later, before sunrise on April 15, when Carpathia begins picking up survivors. Mr. Lord tells the story of the ship through the eyes of those who were there. It's engaging because it has so much heart and humanity. I'll never forget the passage about the women in the lifeboats, just before 2:30 am, seeing the ship ... their belongings ... their loved ones ... go under. Numbed by cold, numbed by emotion, all they could find to say to one another was variations on, "She's gone." (Except for Lady Duff Gordon, Lifeboat #1, who rather ridiculously said to her secretary, "There is your beautiful nightdress gone.")

While this is not a new book -- first published in 1955 -- it included many new-to-me tidbits. For example, I'd never before read what it was like for passengers on Carpathia that night. In the predawn hours, they heard all this remarkable activity: food preparation, doctors readying makeshift infirmaries, engines sounding first as though they'd stopped then like sped up ... They had no way of knowing what was going on and no one told them anything except, "Stay in your cabin. Captain's orders!" How frightened and vulnerable they must have felt!

That's the thing: if you pick up this book, expect to feel -- denial, dread, disbelief, relief, joy, regret, courage, cowardice, gratitude ... I believe every human emotion is within this slim book.

3. What will read next? Something a bit lighter!

Saturday afternoon I Zoomed with my shrink. As the hour came to a close, I confessed that I can't stop worrying about Election Day. What if America re-elects that divisive, incompetent bully who indulges in name calling and can't resist conspiracy theories? (The latest: front line doctors "blame" deaths on the corona virus to make money.) What would that say about us as a nation? It makes my heart hurt.

My doc told me I'm not alone. She mentioned that everyone she spoke  to this past week has expressed similar concerns about our President. Everyone. Whether she saw them professionally or socially. Even a 10-year-old girl.

"How could a man who lies and lets people die become President?" she asked, starting to cry.

I wanted to know how my shrink addressed this.

My doctor told her that this is not her responsibility. Her observations may not be wrong, but it is not up to her to worry about it or fix it. There are adults in her life who love her, and they will take care of her.

I happen to know for a fact those words didn't help that girl.

I was 10 in 1968. I was playing Barbies on the living room coffee table, a TV special about the Beach Boys in the background, when a "special bulletin" came on. Dr. Martin Luther King had been shot. While doing nothing more than standing on a balcony. Chicago erupted in riots.

I was very moved by Bobby Kennedy, addressing the people of Indianapolis the night Dr. King was killed. He was so wise, so sensitive that there were no riots in nearby Indianapolis.

Bobby was running for President, and I saw him on TV and in the paper all the time. He was always surrounded -- by adults, kids, and Freckles the dog. I was very grateful that a man like this would soon be President. He clearly knows what to do: about assassinations and riots and the bloody Vietnam War. We would be OK.

Then just two months later, he was murdered. I saw it all on TV. Followed by the Democratic Convention here in Chicago ... and more riots, and more body bags from Vietnam.

I cried a lot. Adults cannot take care of kids because adults let stuff like this happen.

1968 marked me. I carry it with me every day, like the vaccination scar on my left arm. Sometimes it comforts me. If this country can get through a year of assassinations, riots and war, we can get through this.

It also made me a Democrat ... a liberal ... a progressive. The best part of me still sees the world like I did then. I still want us to be, as Bobby said in the last speech he ever gave, "a great country, an unselfish country, a compassionate country." Given a choice between a good and decent leader but a sluggish economy, or a bully and a bullish market, I'll proudly take the hit to my wallet every time.

I ended the session Saturday in tears myself. For that little girl my shrink mentioned, and for 10-year-old me. Because now I'm an adult. Now the world is my responsibility. And I don't know how I'll face living in a country that has seen Donald Trump for what he is and still re-elected him. 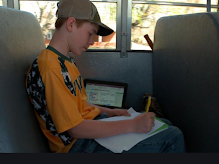 I am a procrastinator. I don't know why, because worry about "things to do" causes me stress and I realize that I'm just in my own way. For some reason, though, as I hurtle toward retirement, I find I'm still the kid doing homework on the bus.

Last Thursday at 4:30, I got an assignment to write for a new client. This was kind of exciting, because I've been dedicated to one client for more than a decade and opportunities to do something else are few and far between.

That's good, right? Well, the client is an automotive company, and there is little I know less about than cars. Still, the medium was an obviously familiar one: blog posts. They wanted two posts, 1200 words each, by end of day Monday. (They aren't due to the client until Thursday morning, but I'm off Tues-Fri this week.)

I told my klatsch of new coworkers I'd be done by noon Monday, no problem.

I am an overconfident fool.

My assigned client tossed a few unexpected things my way Friday and I wasn't able to get to this assignment until end of day. I told myself that, since I am such a nice person, I deserve Friday night and Saturday off. I could knock off those blog posts Sunday evening (in between loads of laundry) and Monday morning.

I started to worry about my own hubris on Sunday afternoon, so at about 1:00 I began working. I researched and then wrote about the first assigned topic: motor oil. I was very pleased with my effort. It was cogent (apparently this client's favorite word) and included all the required search words. Once I did a word count, I was no longer puffing out my chest.

Barely half of the required 1200. What the fuck! This was going to be much, much harder than I realized!

Except for an hour for dinner -- the laundry never got done -- it took me until 11:00 PM to finish. That was a full 9 hours to do one post. How was I going to get the other one done in four hours?

I couldn't. I simply couldn't. On Monday morning I sent the first post off, first thing (meaning I delivered early), and promised they're receive the second one "before I knock off for the day." I was careful in the wording. If it took me until 11:00 PM, well, then 11:00 PM would be when I knocked off, wouldn't it?

Fortunately I picked up speed and was done with the second one (subject matter: car batteries) by 5:37 PM. Considering that I spent 30 minutes on the phone with a coworker* and another 30 in a Zoom meeting with my new boss† and probably an hour being distracted by other shit, that means the second post only took me seven hours.

And I really wish I could get Friday night and Saturday back. Using that time more wisely would have saved my internal organs a lot of wear and tear.

*She has to have a breast lump biopsied, and I wanted to cheer her up.

†He's turning out to be a peach and deserves his own blog post sometime soon.