I dearly love this video.


1) In this song/video, Ms. Sinatra's boots make a serious fashion statement. Do you choose footwear for comfort or fashion? Comfort. When I was a young and leggy girl, I chose for fashion, and I got heel spurs and bunions in return.

2) This is by far the biggest hit of Nancy Sinatra's career, which includes 6 top ten hits. Can you name another? "... and then I go and spoil it all by saying somethin' stupid like I love you." With Papa Frank. "Sugar Town." "Jackson."

3) Nancy recorded it on Reprise Records, which was founded by her father, Frank. Did your parents give you a leg up in your chosen career? Nope.

4) Professionally Nancy has been involved in espionage, singing the theme to a James Bond movie and appearing in an episode of The Man from UNCLE. Do you enjoy spy/secret agent stories? I suppose so. I enjoyed the Bourne movies, and some Bonds, and the UNCLE TV show.

5) Nancy maintains the official Sinatra family website, which includes a link to the site of Mia Farrow. Ms. Farrow was, briefly, Nancy's stepmother, and obviously they are still on good terms. Do you have a big, extended family? Nope

6) Nancy's music -- and posters -- were very popular with the troops during the Vietnam War. Nancy continues to return their loyalty and affection with her efforts on behalf of the Vietnam Veterans Memorial Fund. Here's your chance to promote a cause that's near and dear to your heart. What charity gets your support? I'm a big fan of food pantries. Every time I buy food for myself, I pick up something for $1 or less and toss it into a bag for the hungry in my community. In no time I have a bag filled with pasta, condiments and canned soups and vegetables. People eat, and I don't even notice the expense. Some food pantries prefer cash contributions. To find the pantry near you, go here. BTW, today is the USPS Stamp Out Hunger Drive. In my neighborhood, the mail carriers mess this up, so I don't participate. But in case your local post office is more together than mine, here are the details.

7) Nancy hosts a Sirius radio show devoted to her father's music. Do you have a subscription to a satellite radio or podcast network? Nope

8) Nancy has said that she and her sister Tina had a more comfortable relationship with their famous father than their late brother, Frank, Jr., did. Do you think it's easier for mothers to get along with their sons, while fathers have an easier time with their daughters? I only had sisters, so I can't answer this first hand. But watching the couples in my life, I see that they are parents to lots of Mama's Boys and Daddy's Girls.

9) Random question: Tonight's dinner is on us. Would you prefer to eat at a casual restaurant with exceptional food, or an exclusive restaurant with so-so food but a celebrity clientele? I think it might be fun to dine with the famous. I had a great time in Beverly Hills, eating at the famous Ivy. I'd do it again. But partly because I didn't have to dress up. If I have to dress up to go exclusive, I'll settle for the hoi polloi.

I mean a lot to him

My cousin is a very talented man who has followed his heart and managed to make his career in music. He gives private music lessons to kids and plays in a big band on weekends and, until recently, was a professor at a local university.

For reasons a bit too complicated to go into, we grew up separately, even though his mother is my godmother and we lived not far apart. I'm a little older, and apparently, he always thought I was pretty neat. Five years ago, we had a reunion when his mother returned to Chicagoland for a visit and looked me up. Ever since, he has been very good about reaching out to me. Whenever he plays gigs in my neighborhood, he invites me, and we trade messages on Facebook all the time.

He got a job playing in the orchestra for the touring company of Chicago during its short run here in ... Chicago. This is put him in pretty elite company and he was proud to get the job. And nervous, very nervous. He kept sending me reminders about the short, one-week run.

We've been crazy busy at work and instead of seeing Chicago again (I've seen the play at least twice on stage and then, of course, there's the movie) I really wanted to sleep. Plus, I'm broke and spending beaucoup bucks on a play I know so well just wasn't on my agenda. 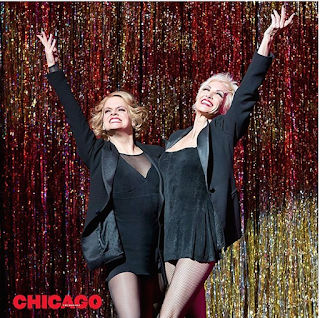 There was just something about the way he asked me that got under my skin. And so on Thursday morning, when I found a $30 ticket on StubHub for Thursday night's performance, I snapped it up.

The production was very entertaining. John O'Hurley is a most talented old hand at the role of Billy Flynn, and both Roxie and Velma were very good.

Best of all, in this production the orchestra was on the stage, not in the pit. So I was able to watch my cousin at work all evening.

Afterward he walked me to my train. One of his sons saw the production ... and me. That was it. Not his wife, not his other son (his daughter lives in New York). This is probably because the show was only in town for a week, but still. He thanked me for coming and repeatedly told me how "sweet" I was for coming out. Having someone in the audience there for him was a big deal.

I felt very good about having gone.

So often, when I think about family, it's easy to fixate on what's wrong with my relationships. Instead of concentrating on the love I don't get, I should stop and feel the love I do get.