I kept busy this weekend with an old friend, Jay Gatsby. I loooooved The Great Gatsby the first time I read it, in high school. Yes, I was listening when the teacher told us it was about the American belief in money equaling success, and our national penchant for invention. (She may even have used the word, "penchant.") But that wasn't my takeaway. For the first time I understood the phrase, "the end doesn't justify the means." I got it. I realized that it didn't matter why Gatsby was bootlegging and money laundering. Love wasn't a good enough reason. Buried in the lush, beautiful prose was a real life lesson and I got it. 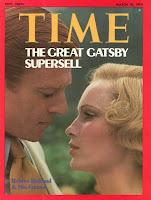 Of the great Jass Age novelists, I enjoy Hemingway's style more than Fitzgerald's. It's clean and spare and credible. But Fitzgerald's masterpiece has a moral core that touches me and teaches me.

To celebrate the release of the latest cinematic incarnation, starring Leonardo DiCaprio as my old friend, I watched the 1974 version. The one I saw in high school, starring my great teenage crush, Robert Redford. At the time, I loved him as Gatsby, but I couldn't stand Mia Farrow as Daisy. I remember thinking of her as "Dismal Daisy." Why was he so obsessed with such a silly girl? Watched today, I still feel the same way about Jay and Daisy. Karen Black as Myrtle is woeful. But I loved the sets and the clothes and the music. And I appreciate Sam Waterston -- so familiar as Jack McCoy on Law & Order -- as Nick. Our Everyman. Our entree into that privileged world. 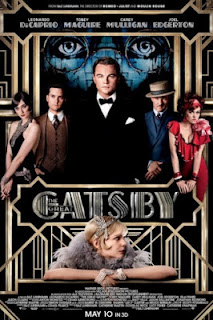 Then I went to see the new, 3D Baz Luhrman version on the big screen. Oh, how it sucks! The sets are elaborate and annoying. The soundtrack is intrusive and pretentious. I'm sure Leo is a better actor than Redford, but he's less of a star, and when he appears behind the wheel of the yellow convertible or slips into the pink suit, the audience actually snickered at how silly he looked.

Carey Mulligan is Leo's object of desire and I found her to be just as dismal a Daisy. I think maybe that part is unplayable. I found her so sympathetic in the book, a woman as restricted by her money as she would be by poverty. But in both 1974 and 2013, she's just grating.

I wonder why it's so hard to make a good movie based on this wonderful book.

One thing at a time 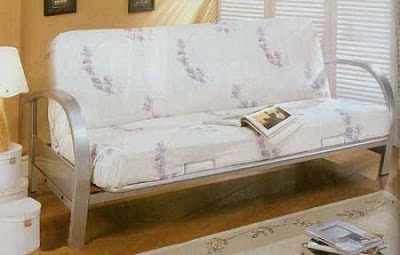 My living room is slowly coming together. First I got the new air conditioner. Today I bought this new futon (though when it arrives it will have a green/pink print cover).

I went futon for a reason: When it gets too dirty or shows too much wear, I can just get a new cover or mattress. I'm tired of everything in my life being disposable. My last two sofas lasted little more than five years each. One was an off-size, so I couldn't get a slipcover for it and it wasn't worth the investment of having it reupholstered, and the one I'm sitting on now turned out to be a piece of crap.

Anyway, next on my list of things to do in this living room is get rid of a lot of crap. Then I'm going to use my carpet cleaner. Soon this place will be presentable.

Thinking about: A new sofa or futon. I think I want a futon, because I just throw the cover in the washer when it gets dirty. But I wonder if a futon will be sturdy enough for the wear it will receive. The one I'm sitting on, from Crate and Barrel, started falling apart after four years.


Feeling: Broke. Just bought a new air conditioner, and now I need a sofa! But I have to have these things before my oldest friend comes to visit in August.


Reading:  Dean and Me: A Love Story. No one is more surprised than I am that I'm enjoying it. I was barely aware of Dean Martin and Jerry Lewis as a duo. They broke up before I was born and, unlike the Marx Brothers, their movies don't show up on TV. Also, I'm not a big fan of either of theirs separately. Yet I find this book wildly entertaining. A great portrait of the 1950s in America.

Listening to:  Amy Winehouse. "He walks away, the sun goes down, he takes the day but I'm grown," from my favorite track of hers:

Wondering: Why I suddenly have such a craving for barbecue!

Looking forward to:  Devouring that small plate of Trader Joe's barbecue pulled pork that's waiting for me in the microwave.

Missing:  My mom. It's my first Mother's Day without her. Although today isn't as painful for me as I'd feared it would be.

Watching:  The 1974 version of The Great Gatsby. I saw the new version Saturday and I like this one better. Though I'm not that crazy about this one, either. Redford is a better Gatsby than Leo, but Carey Mulligan is just as unsympathetic a Daisy as Mia Farrow was. Why is it so hard to make a good movie of this terrific book?