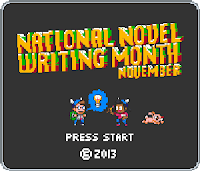 Dorothy Holley and I will be spending a lot of time together this month. For she is the heroine of my novel, More Real than Anything.

November is Nanowrimo, aka National Novel Writing Month. I have pledged to write a 50,000 word novel before November 30. Hundreds and thousands of us, all around the world, are taking part. No one will ever see my novel, and I may not finish it, but that's not the point.

I write for a living. I'm a wordsmith for pay. But sometimes I like to write on my own, for me. And that's how I ended up with Dorothy. Here's my official synopsis, where my girl Dorothy first sketchily came to life. Wish us luck!

Dorothy Holley, by far the prettiest girl in North Tonawanda, NY, believed the world was just waiting to be dazzled by her. Yet when she traveled less than 50 miles to Manhattan, Dorothy discovered that New York was full of girls who had been their hometown’s prettiest and, much to her disappointment, she didn’t instantly become a designer’s muse or even a cover girl. Instead she found herself just another brunette with a portfolio under her arm, more likely to demonstrate the new Hoover Slim Silhouette vacuum at a trade show than to model a Balenciaga gown.

In the summer of 1962, faced with a stack of bills, she took a temporary job in the mail room of a silly little magazine called Teen Datebook. She found herself reading letters from preteen girls who were consumed with longing, just as she had been in North Tonawanda. She was inspired because she knew how to turn their hankering into hope, and by 1967, Dorothy Holley had worked her way up to editor. She realized that within the masculine world of magazine publishing, she was a punchline, “The Citizen Kane of the Clearasil Set.” But she didn’t care. Unlike her male counterparts, she reliably made millions, and at a newsstand price of just 25¢.

“Sometimes when I look at you, I feel I'm gazing at a distant star. It's dazzling, but the light is from tens of thousands of years ago. Maybe the star doesn't even exist any more. Yet sometimes that light seems more real to me than anything.”
Haruki Murakami