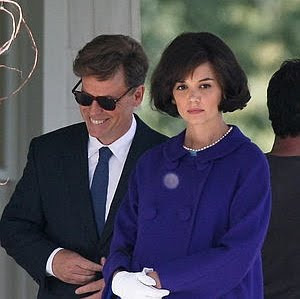 I have finally seen the first installment of the "controversial" Kennedy miniseries on Reelz Channel and wonder what all the fuss is about. There's nothing new here: Joe Kennedy Sr. was single-minded, charismatic and morally bankrupt; Joe Jr. was a petulant bully; Rose was a pious doormat; Bobby saw things only in black and white; Ethel was rambunctious; Jack had a weakness for a well-turned ankle; Jackie was aloof and regal. So far, these are all familiar caricatures, with no nuance. But nothing here is shocking.

Greg Kinnear is better than I expected as JFK. He does the familiar accent without sounding like he's doing an impersonation. He transmits intelligence and humor. He doesn't capture the courage, complexity or imagination of the man, but that could be the script. It is pretty pedestrian.

Katie Holmes is just as adequate as JBKO as Roma Downey was as A Woman Named Jackie 20 years ago. Which is to say she wears the clothes beautifully. There's nothing else going on.
Posted by The Gal Herself at 4/04/2011 08:35:00 PM 2 comments: