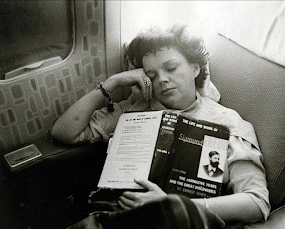 1. What are you currently reading? Judy and I by Sid Luft.  This year is the centennial of Judy Garland's birth. As a classic film fan, I felt attention must be paid, so I reached for this memoir, written by her ex-husband.

Judy and Sid were together for 14 years. Considering she died at 47, that's a significant chunk of her life. As lover, husband, and manager, he was with her for the second, post-MGM phase of her career and produced A Star Is Born (which served as the template for Lady Gaga's 2018 version).

So far, the Judy that comes to life is powerful and determined. This intrigues me. The Garland Legend depends on her being a vulnerable victim. Yes, as a child star, she was exploited by MGM and her mother. Yes, she was addicted to pills. But she understood her talent and her power and was more willful than I realized. A fascinating book by someone who knew her well. (I just wish there was less about Sid's early years. I don't find him as captivating as Judy did.)

2. What did you just finish reading?  Dead Center by David Rosenfelt. On the one hand, Andy Carpenter of Patterson, NJ, seems to have it all. He's a wealthy lawyer who only takes cases that interest him. Dogs are his passion and he is committed to his animal rescue foundation. He has a circle of friends he watches games with at the local sports bar. His life is moving along smoothly, except he's lonely.

He hears about a double homicide in Findlay, WI. The source of this information is Chief Laurie Collins, the woman who left him to take this opportunity in law enforcement in her hometown. She's made an arrest in the case, but there's something that doesn't feel right to her, and she trusts Andy. A possibly innocent man on trial? A chance to sleep with Laurie again? Andy is so there! He packs the car, and he and his Golden Retriever Tara take off for Wisconsin.

This is #5 in the series and I felt it was missing some of the freshness and originality of the previous efforts. Maybe it's because less action takes place in the courtroom, where Andy's verbal skills and sense of right and wrong can shine. With Andy acting as an investigator, this book has a same-old PI flavor. Kind of deja-Spenser. Robert Parker's Spenser has an intimidating African American enforcer in Hawk. Andy has Marcus. Spenser has a can't-live-with-her/can't-live-without-her lover in Susan, Andy has Laurie. Pearl the Wonder Dog has opened Spenser's heart, Andy can't go anywhere without Tara.

I'll be back, though. Andy makes me smile. I'm hopeful that the next book in the series will return to the legal maneuvers that got me hooked in the first place.

3. What will you read next? A mystery or thriller.