What's all the fuss? 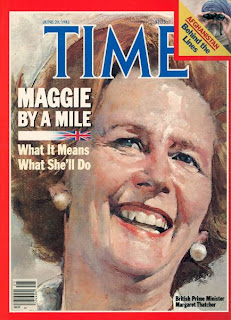 Yesterday afternoon I snuck out to see Iron Lady, starring Meryl Streep. I never was a fan of Margaret Thatcher's, and still am not. That "pull yourself up by your bootstraps" philosophy doesn't include those who don't have boots. But that's not the point of my post.

Meryl Streep rises above a pretty mediocre film. The narrative is all over the place. Some very dramatic personal moments -- such as a bomb attempt on her life or her husband giving her two strands of pearls to commemorate the birth of their twins -- are glossed over and don't have the emotional wallop they should have. I'm still not sure what the movie was trying to say.

But Meryl Streep humanizes a woman whose public persona was, for me, at least, lacking in humanity. She shows her as trailblazer who often got her feelings hurt, a mother who consciously made tough personal choices, a wife who loved her husband dearly. And her fragility now, as she fades into senility, is very touching.

Critics seem to feel that it's not right to show this formidable conservative icon as she (apparently) is today. Well, get over it. She's a historic figure. Much as I revere JFK, I don't complain when he's shown with other women or (worse) with his brains flying through the air. It happened. Every life has an arc -- a beginning, a middle and an end. Every life has good and bad, exultant and embarrassing.

If this mess of a movie is historically accurate, Maggie's supporters should just get over it. And thank Meryl Streep for making her more likable than I thought possible.
Posted by The Gal Herself at 1/16/2012 09:10:00 AM 2 comments: