Here I thought I'd just become unpopular.  I hadn't received a call on my landline since the Saturday  when we learned Ernie Banks had died. Turns out there was trouble with my phone service.

On Sunday I spent a crazy long time on my cell phone with Comcast customer service. It was a frustrating experience because the rep -- though very nice and polite -- spoke in very heavily accented English and we had a difficult time understanding one another. After doing a series of remote diagnostics, he reported that the problem was with my phone. I accepted that. It was a cheap model purchased from Radio Shack more than two years ago and I don't know how long these things are supposed to last. Back in Bell Telephone's glory days, a phone would last decades, but those days are long gone.

So on Monday I went to Staples and bought a lovely new phone, on sale, for about $60. I was happy. I charged it. I plugged it in. It didn't work.

At dawn this morning I was back on the phone with Comcast customer service. I got a different man who responded to my problems from foreign shores who did the same diagnostics -- ignoring my cries of "no, no!" and "wait, wait!" -- and told me the problem was with my phone.

IT CAN'T BE! IT WAS A NEW PHONE WITH ALL NEW CORDS!

I told him I wanted a new modem. He told me I could get a new one for free if I went to "the nearest Comcast service center." Which he looked up for me. Turns out the nearest isn't anywhere near me. It's a $14 cab ride to a terrible neighborhood.

I got the brand-new, cellophane-wrapped modem home, hooked it up, and called Comcast customer service to activate it. The phone worked. Hurray! But now the computer was non-responsive. It took, literally, an hour on the phone to customer service to get everything I pay for.

So from dawn until 2:00 PM, I was concentrating on Comcast. It was the waste of a day off from work. It was exasperating. 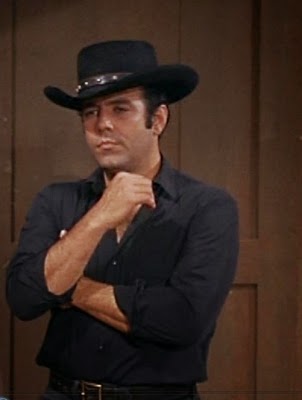 And so I did what I do, and sent my mind to the happy place. I couldn't decide, though, exactly where the happy place was. I knew I wanted a competent cowboy to rescue me. That's a given. But did I want a new millennium hero who wouldn't be overwhelmed by the demands of today's technology? Or would I prefer to travel back to the 19th century, when life moved at a slower pace, and if I wanted to pick up my messages, I'd climb upon my horse and ride into town to the telegraph office?