1) A "soap opera" is defined as "an ongoing, episodic work of dramatic fiction."

2) Originally broadcast on radio, these daily dramas became known as "soap operas" because they were frequently sponsored by soap manufacturers like Dial, Palmolive, and Procter and Gamble.

3) As the World Turns (1956-2010) is one of the longest-running, most popular daytime soaps ever. Most Americans who were home and watching TV during the day were tuned to it 50 years ago and received the first word of President Kennedy's assassination when Walter Cronkite interrupted the broadcast.

4) In 1972, the National Association of Television Arts and Sciences began giving out Daytime Emmy Awards. The NBC show The Doctors won the first for Best Daytime Drama.

5) Today, the daytime drama has hit on hard times. Ratings are down and costs are up. Court shows like Judge Judy and talk shows like Dr. Phil are cheaper to produce because fewer sets and less scripting are involved. The longest-running shows -- As the World Turns, All My Children, Secret Storm and One Life to Live -- were all recently cancelled after more 30 years.

6) Peyton Place was the first nighttime "soap opera." It premiered on September 15, 1964 and ran two (sometimes three) nights a week for nearly 5 years. In its last season it was still in the Top 20 in Neilsen Ratings. It was cancelled because of costs -- reruns were never aired and the production values were high.

7) Dallas (1978-1991) was the next prime-time soap blockbuster. CBS learned from ABC's Peyton Place missteps. Dallas aired one hour-long episode, one night/week and there were reruns. The repeats not only reduced costs, they were quite useful in maintaining the public's interest in the series and the resolution of each season's "cliffhanger."

8) Dallas had the biggest "cliffhanger" of all with "Who Killed JR?" In November, 1980, 83 million people tuned in to see that Kristen Shepard pulled the trigger. That means there were more viewers than there were voters in the 1980 Presidential election. At the time, it was the highest rated show in TV history. 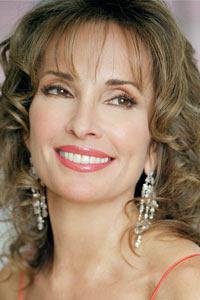 10)  Divas and vixens and bitches were no stranger to daytime viewers, though. Lisa Miller (Hughes Eldridge Shea Colman McColl Mitchell Grimaldi) of As the World Turns and Erica Kane (Martin Brent Cudahy Chandler Montgomery Marick Montgomery) of All My Children -- shown here -- staked out that territory years earlier.

11) Movie actresses who appeared in soaps include Meg Ryan (As the World Turns), Demi Moore (General Hospital), and Kathleen Turner (The Doctors).

12) Movie actors who appeared in soaps include Christopher Reeve (Love of Life), Kevin Bacon (Search for Tomorrow) and Ray Liotta (Another World).


For more about the Thursday 13, or to play along yourself, click here.

What's the penalty in this state? 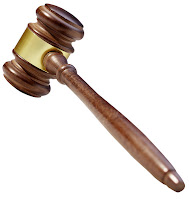 I now share an office with three other coworkers. We are in one another's pocket, day in-day out. And I'm at the end of my tether with one of them. If I were to strangle her, how much time would I get?

We lost a coworker yesterday. I am sad about this. It hasn't escaped my notice that she can't be bothered to offer him contacts for a new job, or even shoot him a "how are you doing the morning after?" email or text. Instead she's blissfully on the phone, yammering all day with her sisters and friends. She's also been known to strum her ukelele and sing softly, right there at her workstation, in the office we all share.

In a world where lay-offs may still be imminent, I don't appreciate her advertising how NOT busy we are in this office.

I'm not violent by nature, but slamming her cranium with the gavel shown above might be satisfying.

My friend, Tom, was let go Tuesday morning. One of the first things he mentioned was his girlfriend. "This is going to break her heart."

Camille is 35 and eager to get married and have a baby. She and Tom have discussed what kind of engagement ring she would like. He was planning on giving her one for Easter. I'm sure she was expecting one, and she will be disappointed.

But she is also a pediatric nurse whose job regularly presents her with sick, sometimes terminally ill, babies. I suspect that when you handle life and death in your hands each day, the loss of a job at an ad agency probably isn't that big a deal.

Also, I believe she loves him. I bet that when she saw the pain he's in, she wasn't even thinking of herself.