1. My uncle once... sent me a check for $160. It was 1978, I was in ongoing, miserable pain and needed a root canal and crown. I didn't have dental insurance, nor did I have the $160 to get the procedure done. To put the $160 in perspective, that was more than my entire week's take-home pay. My rent in those days was $300. I was trying very hard to be independent, but my mom called one night and I started to cry because of the unremitting agony. She didn't have the money just sitting around, either, but she knew who did. She called her brother and voila! A check showed up in the mail with note that just said, "Happy Birthday/Merry Christmas." I called and told him I couldn't accept it because I could never pay it back. He told me that's why he was happy to give it to me -- he knew I wouldn't advantage of his generosity.

Over the years, both my older and younger sisters clashed with my uncle over money. He was at that time a rich man and they thought he was selfish and cheap because he didn't share the wealth with them. I can tell you that isn't true. He just didn't want to be taken for granted.

3. When I was five my parents ... had a Lincoln Continental convertible. My dad loved it, my mom hated it. (Her hair!)

5. I will never forget to... feed my cat Reynaldo. He won't let me forget!

6. Once I met 7... That would be Pit Martin. At the time he played center for the Chicago Black Hawks. He wore #7 and I met him at an autograph event.

7. There’s this boy I know ... who was bullied in school. His classmates called him "gay" because he prefers cats to dogs and likes to hold babies. He was only 9 years old and didn't really know what "gay" meant. Anyway, his mom moved him out of that school district and he's doing better. He now lives downstairs from me.

8. Once, at a bar, I ... was asked if my drapes matched the carpet. I was en route to the ladies room, more than a little tipsy, and didn't understand why this stranger would be interested in how my apartment was decorated. While I was washing my hands and checking my makeup in the mirror, it dawned on me what he was asking. I was so angry, I went looking for him in the bar but couldn't find him. 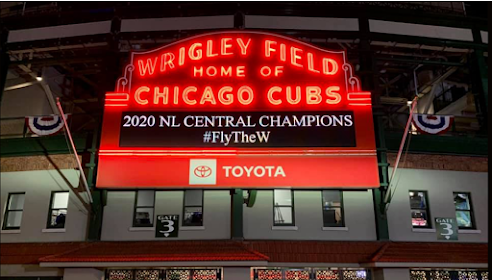 Ok, so this year there was none of the hoopla that accompanied 2016. No crowd, no police were required to keep order, no helicopters hovering overhead to cover the event for the national news. Management just changed the marquee sometime before midnight and released this photo.

But you know what? It's still sweet. Not a single Cub player has come down with the corona virus. Some of the guys have slumped, some have been injured, but they've been there to pick one another up. I'm proud of my guys.

In August I posted about Theresa. She just opened a fabric/yarn shop outside Chicago. It's been a tough go during the pandemic, but she's managed to keep the doors open.

The store's policy is simple: customers and employees both must wear masks when they interact. Theresa states it loud and often. So when an elderly woman placed an order by phone, she was told plainly that when she came to the store to pick up her thread, an employee would be happy to walk the order out to her car and wait while she checked it for accuracy, but that she had to be wearing a mask when she rolled down her window. This policy was reiterated in the confirmation email.

When this woman pulled up to pick up her order, she was defiantly maskless. Concerned about her employees' safety, Theresa took the order out herself, handed it to the woman through her car window, and wordlessly turned and walked away.

The woman shouted after her, "You're supposed to stand here while I check my order!"

"You're supposed to wear a mask," Theresa responded.

The woman got home and left Theresa a blistering Google review. Theresa was bereft. She's working so hard to keep her staff safe and employed, and being called "arrogant" and "rude" won't help her little business survive.

GUESS WHAT: The 78-year-old woman is now on a respirator. The others in her sewing circle have posted prayer requests for her recovery from the corona virus. I learned about this from Theresa, who was unable to sleep after hearing the news. The sewing circle was founded to help old friends from the Class of 1960 stay in touch. Now they're all at risk.

I feel the way Theresa does. This is a tragedy, and an avoidable one. It's probably playing out right now in all 50 states.

Covid is not red or blue. It's not a member of the deep state. It is a virus. Be smart. Be considerate of the people you meet. Wear a mask.