It just gets worse and worse 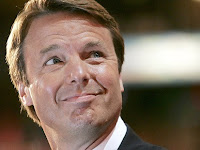 Here's the latest in the John Edwards saga, as reported today by CNN:

Edwards paid Hunter's production company $114,000 for a series of videos featuring him before and during his 2008 campaign ... Sunny Hostin, a former federal prosecutor, told CNN that if Edwards willfully failed to report payments to his mistress that could be considered campaign contributions, he could face felony charges that carry prison terms of up to five years.

I could cry out in disgust that this humiliation and stress is not something Elizabeth Edwards deserves at this time in her life … or rail about how, by his cynical and sleazy behavior, Edwards has let down the poor he championed so eloquently … or express my deep sympathy for the campaign workers and contributors who gave of themselves for a Presidential campaign that never should have been waged ...

But mostly, I guess, I'm disgusted with myself because I was not only attracted to this douchebag, I voted for ROD BLAGOJEVICH. Twice.

God, what's wrong with me?

(I know, it could be worse. I could have voted for John Edwards and been hot for Blago.)