I did nothing today 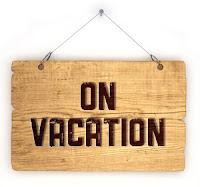 I feel guilty about my nothingness, since I rescheduled this morning's hair appointment because of a storm that didn't quite materialize as predicted. I know this puts undue stress on my stylist, who is squeezing me instead on Wednesday at 5:00 -- which is his own time. But truly, TV's "storm trackers" warned us over and over about freezing rain and black ice and I thought, "Fuck this. I'm on vacation next week! I don't have to [get my hair cut, go to the post office, pick up prescription kibble at the vet] on Saturday morning!"

And so I didn't. I slept in. I binged on Will and Grace reruns. I had a massive brunch -- cinnamon apple crepes with a side of bacon. I watched the village kids line up to ride in one of two horse-drawn sleighs traveling up and down Main Street.

As I was leaving the coffee shop, I got to see The Big Guy up close and personal as he slipped in to get warm with a quick cup of java at the counter. I learned that when he's in the red suit, Santa is always on duty. A girl -- shy, perhaps because she's on the verge of no longer believing -- stared at him long and hard before approaching him with her tentative request: "Earrings. Pierced. Dangling." I felt sorry for her, because both the shop owner and a patron were taping her exchange with their phones. Apparently they thought it was so adorable -- and it was, young girl unexpectedly meeting Santa while having brunch with Mom --that it needed to be immortalized. I don't think they thought about how uncomfortable it was for the "star" of their video. It was really her memory and they were infringing on it.

Then I did a little utilitarian shopping -- oversized, padded envelope, drain cleaner, and other such boring shit -- made my way back home in the rain/snow and took a nap. And now I'm bingeing on the new SJP show, Divorce.

1) This beloved carol takes its lyrics from a French poem. What else can we thank the French for? French toast. I haven't had it in a while. Maybe it's time to treat myself!

2) How well do you know  "O, Holy Night?" Without looking up the lyrics, could you sing along with Ella? Not well at all. I don't really like it. Here's the thing: It was chosen because it seemed to be popular with our Saturday 9 regulars when last summer we were asked what carol popped into our heads.

Not only don't I care much for this song, but (hold on), I'm not that crazy about Ella Fitzgerald. I know, I know! No less an expert than Frank Sinatra said, "It doesn't get any better than Ella." But both she and this carol leave me cold. If I were queen of the blogosphere, we'd be doing Andy Williams singing "Silent Night." My favorite carol by the man whose voice just means Christmas to me.

BTW, even though this Christmas Eve I will be away from home, we'll attend a church in Key West that ends its service by inviting the congregation to sing this by candlelight. That's an important Christmas tradition for me. I so love that I'm able to continue it.

3) In order to get this record into stores in time for Christmas 1967, Ella had to record this in late July. So let's reverse that. Now that it's Christmastime, what do you miss most about summer? My guys! Have you heard who won the World Series? MY GUYS!

4) Sam is crazy about the open-toed pumps she'll be wearing to holiday parties, but that means she needs to get a pedi. Will you be at a salon between now and year-end? Yes. I'll have a haircut/color Wednesday evening at 5:00. It was supposed to be this morning but I threw myself on the stylist's mercy to get it changed because of today's winter blast. I don't want to take a cab on streets slicked by freezing rain, and the thought of public transit in these conditions makes me want to cry. Fortunately, I've known him for a very long time -- I've been in his chair for decades and before that (right after high school) we actually dated for a summer -- so he'll see my right after he closes on Wednesday. Which reminds me: I must tip him extra big this time. I'm on his personal time.

5) Will you be consuming any egg nog this holiday season? And if you do, will it be spiked? I don't know if I'll be having egg nog, but if I do, it will be spiked.

6) Thinking of holiday cuisine, what's your favorite Christmas cookie? My grandma made almond cookies similar to these every year. They were my favorite on her tray of cookies, but I found out recently that she didn't like making them, or eating them, for that matter. She thought her only daughter, my aunt, liked them and so she made batch after batch. Turns out my aunt really didn't care for them but thought my grandma was proud of the way the recipe came out, so she raved about them. Kind of like a cookie Gift of the Magi, I guess. At any rate, my aunt and I agree we both miss my grandma and her cookies very much this time of year. 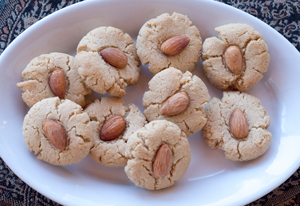 7) Sam knows she will get a bottle of red wine from her boss, because that's what he gives his staff every year. Is there a gift you can count on receiving? I haven't received it yet, but I bet my cousin will send me a calendar, as she does almost every Christmas. As a private joke to myself, I sent her a Lord of the Rings calendar this year. (She's loves her some hobbits.) 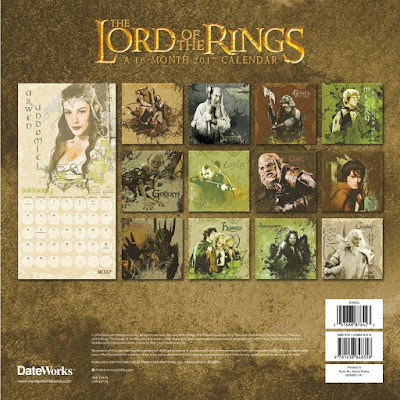 8) What one gift would you most like to receive this year? Do you think anyone will get it for you? The new movie Jackie is only playing at a handful of theaters and none is near me, or convenient to public transportation. I'd love someone with a car to take me. (Though since the subject is the immediate aftermath of the assassination, I appreciate that it's not a  feel-good holiday movie.)


9) This time of year is big for charitable fundraising. Here's your chance to plug a cause or organization that's near and dear to you. Toys for Tots. I hate it, HATE IT that some child will feel he was naughty or that Santa doesn't love him, or gives up on Santa before he's ready, just because his parents can't afford a gift. If you haven't donated to a toy drive in your own neighborhood, please consider helping out by clicking here. There's still time, and Toys for Tots still needs your help. Let's keep the Christmas magic alive for some wee ones.