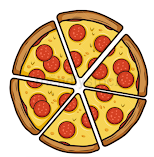 My fully-vaxxed nephew had lunch with his favorite fully-vaxxed aunt today. It's the first time we've been in the same room since his sister's wedding last October! Yet some things even the passage of time won't change. He still had as much pizza as he could bear and a strawberry shake. That's been his standing lunch order for as long as I can remember, even back when he was still in single digits.

He's home from school. Junior year of college was his best so far. He enjoyed his classes because they were more closely aligned to his poli-sci major. Even his general ed English class was devoted to exploring race in modern American literature. His circle of friends has expanded. He's happy to be home, but not eager for college to be over. He knows by this time next year he will be a graduate and will need a job in his profession. He will likely be leaving his hometown. It's overwhelming.

We talked about baseball (Rizzo!) and I caught him up on my life. Telling him about John and John's curious, dangerous refusal to take control of own healthcare gave my nephew an opportunity. He shared that he sometimes suffers from similar anxiety, and that he's found it to be more disturbing and disruptive than depression. I'm sorry he's suffering this, but grateful for the opportunity to talk to him about it. There's a lot of truth in the old saying: "We're only as sick as our secrets." It's healthy to shine the light into the dark corners.

When we parted, we hugged. My first hug in seven months!