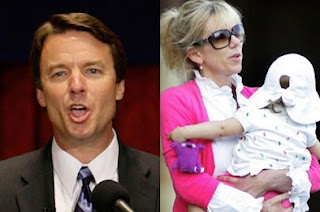 As much as I admire Elizabeth Edwards, her writing and the way she lived her life, I have never been able to work up too much hatred for Rielle Hunter. She seems like a damaged, ditzy, overblown girl -- an emotionally stunted flower child who let herself be used by an opportunist. And now these two have a child, a little girl who is at the heart of a national, legal scandal. It's so very sad.

I learned something that validates my instincts about Rielle Hunter. She is the daughter of heartbreak and scandal herself. She was once Lisa Druck, the daughter of a wealthy FL attorney and a member of the privileged horsey set. She had a beautiful show jumper named Henry the Hawk. When her father hit hard times, he paid a guy named Tommy "Sandman" Burns to electrocute her horse for the insurance money. What's worse, the idea of using alligator clips to attach wires to the poor unsuspecting horse's ears was Mr. Druck's idea. Left less of a mark, looked more like natural causes, made it easier to convince the insurance company the poor horse died of natural causes. The FBI was involved and there was an ugly scandal, complete with indictments and jail time.

I used to think she changed her name from Lisa Druck to Rielle Hunter because it sounded more ethereal. Now I see it as patricide, denial of the father who killed her horse and broke her heart.

Makes me wonder what hells await little Quinn, another little girl at the center of a scandal. Let's hope history doesn't keep repeating itself.