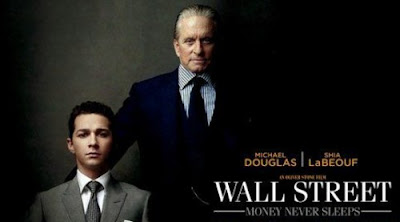 This is the second terrific performance I've seen by Michael Douglas in two months (the first being Solitary Man). One of the things I've found interesting about his work lately is that he's exploring the lives of men over 60. Given his current health problems, it's especially poignant to watch his characters face their own mortality. And, in the case of Gordon Gekko, you want to scream every time he lights a cigar. In the movie, it's a sign of privilege, in real-life, it's simply dangerous and stupid. Also, he has a monologue about Gekko's son, Rudy, and drug addiction. Again, the way art imitates life is chilling. I'm also reminded that Michael Douglas is great at delivering monologues. It could be what he does best. Whether it's "Greed is good," from the original Wall Street, or "I am the President" from The American President, he's good at talking to the camera, and us, effortlessly holding our attention all by himself.

This Wall Street sequel is a very well made movie. Visually it's high-tech and glam. The performances (Douglas, Shia LeBeouf, Frank Langella and Josh Brolin) are uniformly solid and engaging.

I did have a problem with the script/plot. It was so Byzantine that I got lost in who was scamming who and what was happening with this or that deal and what the ef is Susan Sarandon doing in this film, anyway? So I just kinda gave up and enjoyed the ride.
Posted by The Gal Herself at 9/27/2010 07:51:00 AM 4 comments: