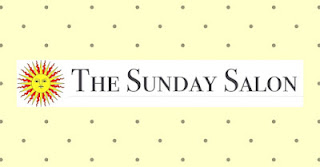 In praise of Atticus and Andy.  In honor of Father's Day, I'm reflecting on my two favorite fictional fathers. (Say that three times fast!)

Atticus Finch was created by Harper Lee in To Kill a Mockingbird. A small-town Southern lawyer, he's admired by the neighborhood and loved, but taken for granted, by his two children. They trust their father will care for them and know what to do the same way they know they will have lemonade to drink and a soft bed to sleep in at night. Their casual attitude makes that moment toward the end of the story -- when a courtroom observer admonishes the daughter, "Miss Jean Louise, stand up. Your father's passing." -- even more moving. It's the dawning, when she begins to realize how special her father is, and how lucky she is to have him. 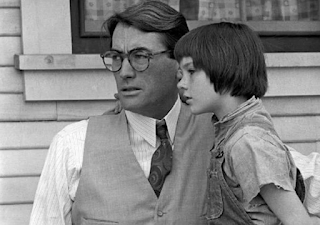 I've seen the movie about 10,000 times, beginning in high school, when we watched it as a class after finishing the book. I most recently re-read the book in 2020, during the covid lockdown. There's a character in the book I'd completely forgotten, a judgemental aunt who doesn't approve of Atticus' parenting techniques. Reading that he sometimes questioned how he was doing as a single dad touched me and made me admire him even more.
I wish every little girl could have a father like Atticus, who carefully allows her to feel her emotions but then teaches her how to reign them in, and who shows her right from wrong by his words and his examples. (No, I haven't read Go Set a Watchman. I don't need any more Atticus. He's perfect in To Kill a Mockingbird.)
Andy Taylor is the sheriff of fictional Mayberry. The Andy Griffith Show was a joint creation of director Aaron Ruben, producer Sheldon Leonard and Griffith, but everyone agrees Andy was the force behind his character.
Andy was a sheriff who didn't wear a gun. "When a man carries a gun, the respect he thinks he's getting might be fear. I don't want the people of Mayberry to fear a gun. I'd rather they respect me." How refreshing in a culture that fetishizes guns! 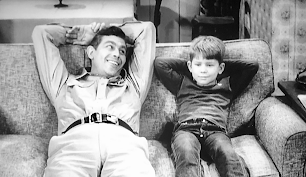 Andy is an involved "pa" to his son, Opie. He helps with homework, doles out advice, and makes sure Opie knows his father is available for both serious chats and fun (usually down by the fishing hole).
There's a famous father/son episode reminiscent of To Kill a Mockingbird. Opie disobeys Andy and accidentally kills a mother bird with a slingshot. He punishes his little boy -- who has also lost his mother -- not with a spanking but by making him listen to the mournful, hungry baby birds chirping outside his window. This inspires Opie to take the baby birds in and raise them himself. When the time comes, with Andy's help, Opie makes the painful decision to let the birds go. The episode ends with Opie ruefully observing that his birdcage sure looks empty, but Andy encourages him to look up and see how full the trees look. It's lovely, but it's not my favorite.
I love the one where Opie comes home with tales of his new friend, Mr. McBeevee. He describes this character as a magic man who wears a shiny hat, walks atop the trees and jingles when he moves. Everyone encourages Andy to discipline Opie for telling tale tales. Andy refuses.
"You don't believe in Mr. McBeevee, do you?" Barney asks.
"No," Andy says carefully. "But I do believe in Opie."
Then Andy happens upon Mr. McBeevee himself. McBeevee works for the phone company. He wears a hard hat and a tool belt  and works up in the trees to check on the phone lines. Andy's faith in his boy was justified.
What about you? What fathers have you read or seen that made a lasting impact on you?