1) This song has an optimistic message about love: "It gets tough sometimes, but you can give it one more try ..." Do you tend to take an optimistic look at life? I do, but I have to go through my process. My best friend called it "awfulizing." First I examine the situation, picturing the worst. Then I realize that the worst really isn't that bad, and I can go forward with positivity.

2) In this song, Christopher Cross sings, "Time and time again I see people so unsure like me ..." Tell us about a recent time when your confidence could have used a boost. Now. I'm less worried about the virus than I am the stock market. I'm going to need the money in my 401(k) soon -- within the next year or two, probably -- and oh, how my balances have taken a hit! I keep reminding myself to be grateful that at least I have a 401(k).

4) Though no longer making hits, Christopher Cross still has loyal fans who attend his concerts. Time permitting, he spends time after each show signing autographs. Have you ever asked a celebrity for his/her autograph? When I was in high school, I tried to get the signatures of both Cubs and Blackhawks players. It seemed terribly important at the time.

5) Christopher Cross' dad was an Army doctor stationed at Walter Reed Army Hospital in Washington, DC. With all the museums and monuments, our nation's capital could be a great place for a kid to grow up ... except sometimes we take the advantages of our hometown for granted. Tell us about a nearby museum, park, theater, etc., you'll visit again when this period of crisis is over and it's agreed that it's safe to do so. I want to go to the movies. I want to sit in the dark, eat candy, and be transported to another world.

6) In 1983, when "All Right" was popular, Flashdance was a hit in movie theaters and on the radio. What's the most recent movie you watched? Most recent song you heard on the radio? I watched The Untouchables with Kevin Costner and Sean Connery. I heard "Draggin' the Line" by Tommy James. ("I feel fine. I'm talking about peace of mind ...")

7) Also in 1983, America West Airlines took off, flying between Las Vegas and Phoenix. They went nationwide in 2005 after they merged with US Airways. In 2013, they merged again, this time with American Airlines. Do you collect miles in an airline loyalty program? I'm a whore for American's AAdvantage miles.

8) Super Mario Bros. debuted in 1983. Can you name gaming's most famous siblings? Luigi and Mario. My nephew was soooooo into them for a while.

9) Random question -- Under hypnosis, you discover you lived three past lives. In the first, you were wealthy beyond your wildest imaginings, thanks to a loveless marriage. In the second, you were a star on the roller derby circuit who had earned the nickname "Smasher." In the third, you were a brilliant mathematician who worked your way through school as an exotic dancer. Which of these would you find most shocking? I kinda wish the last two could be true. I'd have great stories to tell! Plus, I'm very uncoordinated and would like to think that in past lives, I gracefully skated and danced and shimmied. So the first one would be the most shocking because it's so sad and disappointing. As someone once said, "If you marry for money, you end up paying for it." 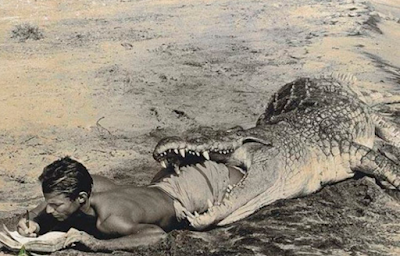 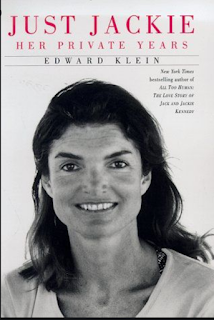 Who's a HAPPY girl? 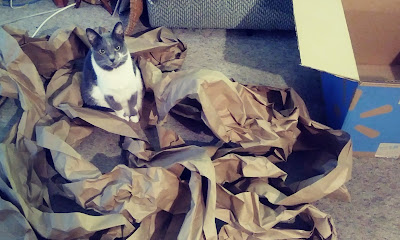 Yesterday was one of the best days of my cat's little life. A big box arrived -- cause for celebration right there -- containing her favorite litter, a new scratching post and all this SPECTACULAR brown paper.

I post more about Reynaldo because he demands more of my attention. But Connie is such a sweet-natured little girl. It makes me happy to see her so happy. 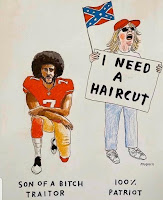