Friday. Little Women. Tonight I watched the 1990s Winona Ryder version. I prefer the Katharine Hepburn version, of course, but this is lovely, too. Book, movie, or musical, my favorite scene is always at the end, when the professor proposes to Jo from under the umbrella.
Posted by The Gal Herself at 8/21/2009 11:21:00 PM 1 comment:

Under Each Other's Skin

My best friend and I have hit a stormy patch. I won't go into gory detail, but here's the dynamic in a nutshell: One of us does something to annoy the other;* somehow it escalates and I get more emotional and he gets more withdrawn and soon something that should be nothing has become a painful rift.

This has happened to us three or four times over the last five years. The physical distance between us (I'm here in Chicago, he's in Denver) exacerbates problems and makes them harder to resolve, of course, but the fact is that we're just gifted at pressing one another's buttons.

As I was spinning out of control, infuriated beyond reason by his sullen pouting, he finally addressed what was going on between us, saying that when the more I "push," the more he wants to "dig in his heels" and resist.

But "everything is fine between us and I am not mad at you. Sometimes frustrated, but never mad. And don't you feel the same about me?"

Yes, yes, I most certainly do. He went on to say that when something is important to me, no matter what, he's there. Yes, yes, he certainly is. I will always be there for him, too.

I just wish we could act like the responsible adults we are (at least in other aspects of our lives) and not drive each other crazy like this. I pray that we never go too far. Strong though the bond between us is, I don't want to test it. I can't imagine my life without him.

This isn't the year 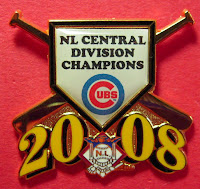 Today the Cubs were sold to the Ricketts Family. I don't care, really, except that it's given me an opportunity to reflect on what they are buying ... and I think it's time for me to admit that my Boys in Blues aren't going to three-peat as the Division Champions. They may not even make the play offs.

If I make peace with that now, the next few weeks will be easier. From here on, even if I'm not watching a team in contention, I am enjoying healthy men in tight white pants playing an entertaining game under the sun (or lights). What's not to love about that?

Thursday. Maggie. She's the coworker who gave me a ride home from today's downstate client presentation. It was great to chat with her. She's an independent contractor -- not an agency employee. She's filling in for a coworker who has been on maternity leave. Since the new mom returns to work on Monday, we'll still have Maggie for two more weeks as she helps the new mom transition back.

It's been great to have Maggie here. Not only because she's neat in her own right, but because the new mom can be a real pill. Maggie gave me insights into the new mom that will help me deal with her when we have to work together going forward.

I don't like the new mom any more today than I did months ago when she left for maternity leave. But I don't have to like her. We aren't going to date, we're going to work together. The insights Maggie shared will make it easier for me to maintain my professionalism.
Posted by The Gal Herself at 8/21/2009 12:51:00 AM 2 comments: