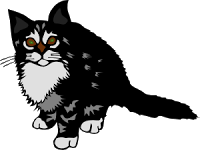 Four of us were doing the bars that Friday night. Me and my boyfriend, John, and Kathy. (John and Kathy were not a couple, much to Kathy's chagrin, because John insisted on being gay.) First up was Juke Box Saturday Night in Lincoln Park. We were in a booth, waiting for another round and a refill on our popcorn, listening to Ricky Nelson and Dion and the Belmonts (it was a 50s themed bar).

Our waitress brought us our pitcher and my sangria (I didn't drink beer in those days). She told us it was on the house and said, as if sharing a confidence, "John Belushi died. Heart attack."

John and I looked at each other and said, "Drugs." 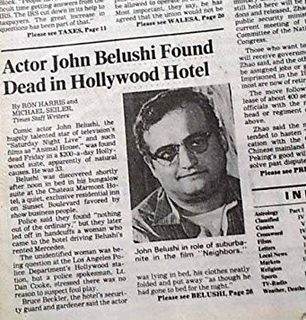 The bartender got on the loudspeaker and reiterated the sad news. "Belush" came into Juke Box Saturday Night every night while filming The Blues Brothers. According to the bartender, he drank and sang and danced like a maniac and then came behind the bar and literally sank his head into the ice. Thus refreshed, he'd continue singing and dancing and drinking.

The bartender made it clear that "Belush" was like family at Juke Box Saturday Night. This round we were enjoying was in his memory. Then they blasted "Soul Man."

We toasted John Belushi and then, as the bar filled up and got noisier, we moved up the street to The Drink Inn on Lincoln. It was starting to fill up, too, and we were lucky to get a table. It was a more folkie bar and there was a girl on stage, strumming and singing songs that reminded me of Jim Croce. Then the club owner took the stage.

He announced John Belushi had just died in Los Angeles of a heart attack. The next round was on the house in memory of our fallen comrade. He came by every night while filming The Blues Brothers. He got on stage and jammed with band and danced and drank. Then he'd go behind the bar and sink his head in the ice. Thus refreshed, he'd continue singing and dancing and drinking.

We got an extra round free because my friend John could honestly claim to being an extra in The Blues Brothers (he's in the car crash scene at the Daley Center).

That was how news traveled 36 years ago. Before the internet and cell phones, breaking news came to us from Lincoln Avenue waitstaff.

Belushi is gone. That boyfriend is long -- and blissfully -- out of my life. But John and Kathy are still in my life. John, especially, is very dear to me. We partied a lot in those days. While I don't specifically recall it, I have no doubt that Stevie, John and I all did coke that night. I always tried to augment my drinking with coke because it minimized the hangovers. Odds are good that the coke was provided to me by a stranger.

Looking back to that night, I feel lucky. Lucky that Chicago is a city that makes it easy to just fall into a cab or onto a bus, so no one had to drive impaired. Lucky that I didn't snort anything too dangerous. Lucky that I finally rid myself of Stevie. Lucky that I have so much history with John.