1. What are you currently reading?  Eighteen Acres by Nicolle Wallace. This is the right political thriller for me to read at this moment. It's about our first female President, Charlotte Kramer. She has the first-ever female White House Chief of Staff, Melanie Kingston. Network star Dale Smith covers the White House and is the first woman in history to find herself in illicit love with America's First Gentleman.
I knew I would enjoy it when it opened with Melanie treating herself to a designer bag. In this beltway fantasy, brilliant and ambitious women wear Jimmy Choos, drink martinis and bake in the sauna as they determine the fate of our nation.
I like these women and I'm getting a kick out of the book. It's written by the same Nicolle Wallace who worked in George W. Bush's White House and helped manage John McCain's White House bid. Now she's a commentator on MSNBC. She's my TV BFF. She writes like the savvy insider she is, and she's spinning a fun, gossipy, exciting book. It's of no real consequence, but in this season, in the run up to a most consequential Presidential election, that's fine with me. (PS The acreage of the title refers to the White House grounds.)

2. What did you recently finish reading?  The Father Hunt by Rex Stout. This book has everything I've come to love in Rex Stout's Nero Wolfe mysteries: twisty plots, minimal violence, maximum atmosphere, and a supporting cast of colorful characters. Every few pages, I felt like saying, "Hello, old friends! I've missed you!"

Which is not to say it doesn't stand well on its own. A case comes to world-famous detective Nero Wolfe through his assistant, Archie Goodwin. Archie meets a woman socially who asks him for help in a personal matter. She wants to learn the identity of her biological father. With her mother's recent death, she thinks this is an almost impossible task. Archie and Wolfe predict it'll take about a week. Boy, are they wrong. Soon the case takes them and us into the worlds of investment banking, network TV and public relations. Along the way, they identify the culprit in a previously unsolved murder.

Complicating things is the fact that the book is set in 1967. Blood tests aren't considered conclusive in determining paternity. Forget DNA. Do today's mystery writers have it easier, or harder, in our technologically advanced world?

3. What will read next? Since Eighteen Acres has me all ginned up on girl power, I am considering a biography of one of three women I've long admired: Lucille Ball or Carrie Fisher or Jacqueline Kennedy Onassis.

I loves me some Bryzzo 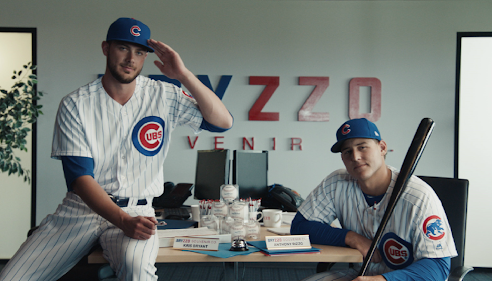 When Kris Bryant gets on base, and then Anthony Rizzo gets a hit to move him around, we Cub fans say the ball was Bryzzo'd. So far this season, there's been no Bryzzo. First KB was hurt, then he was sick,* then he was slumping. Rizz hasn't been that consistent, either.

BUT TONIGHT! Against Cleveland, my boys Bryzzo'd. KB crossed home plate 3 times and we won 6-5.

I shall have sweet dreams tonight. Go, Cubs, Go!

*NOT the corona virus, though.

Three years ago, I was a newbie on our condo association board and found myself embroiled in my first controversy. Nearly 30% of the units were illegally rented. All three of us on the board admitted it was a problem. The issue was how to deal with it.

Our then-treasurer, a young man who loves Ayn Rand and proclaimed himself "all about personal responsibility," wanted to evict all the renters within 30 days. We could have legally done that since they were living here with invalid leases. "Rules are rules," he insisted.

But the renters signed those leases in good faith! It was the unit owners who rented their condos illegally that were at fault. I didn't want to toss those poor people out into the autumn night. (The 30 days would have been up on November 30.) We fought and fought and finally agreed on a humane compromise -- all renters had to be out in six months, or May 30.

Fast forward three years: guess who wants special permission to rent his unit because of hardship. Yes, it's Ayn Randman. He can't sell his unit for a decent price because of the corona virus, can't afford to pay the mortgage and assessments because he lost his job, and wants to rent it out for a year while he moves in with friends. But "rules are rules," and rentals aren't allowed. Wah wah.

It gets better. While he has a tenant waiting in the wings, Mr. Personal Responsibility has also asked those of us now on the board to look the other way because he can't scrape together the money to pay a lawyer to put together a rental agreement. Wah wah.

Of course, I'm going to vote to let him rent his place because it's the decent thing to do for a neighbor who is struggling during a pandemic. I suggested we let the association lawyer review the rental agreement and we'll absorb the cost (about $200) because a properly-worded lease protects us, too.

But galls me. It really does.

There's a line from the Hal David-Burt Bacharach song, "Alfie," that keeps running through my mind, "If life belongs only to the strong, what will you lend on an old golden rule?"