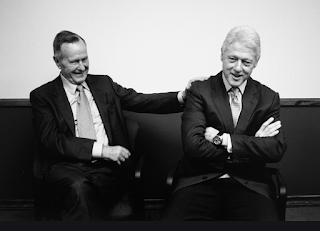 It's no secret that I don't like Donald Trump. I resent how he panders and pimps my Christian faith to hoodwink his base. Then there's his incompetence. Imagine how different our lives would be today if he had bothered to take this virus seriously back in February.

But I'm not Kathy. My friend has gone around the bend when it comes to our President. She has been too isolated from her grandkids and has been listening to too much progressive radio. She can barely see reality in her rear view mirror.

She suspects that letting people die of the virus, all around the world, is a plot that Trump and Putin cooked up together.

She's convinced that he is going to use the crisis to "cancel" the November election and just declare himself President for another term.

I told her to take off the tinfoil hat. Her son and one of her adult grandchildren may be Trumpers, but that shouldn't give her a skewed view of life in one the country's bluest states. HRC beat Trump in Illinois, 56% to 39%.

"Have you ever seen anyone wearing a MAGA hat in real life?" I asked her.

"How often do you see Obama shirts?"

"I saw one on the bike trail yesterday," she laughed. "And I still wear mine."

This seemed to make her feel better.

I advised her to quit listening to talk radio and instead listen to music. She got all dramatic and told me that it's her "responsibility as a mother and a grandmother" to know what Trump is up to. I reminded her that Gov. Pritzker has a greater impact on her kids' and grandkids' lives right now. She sounded skeptical.

I know we're each doing the best we can during this pandemic. I understand that sheltering in place can have a great and negative impact on us from time to time. But instead of exhilarating me -- as  calls from friends have done during this period of crisis -- she left me exhausted.