Oh, Francis!* You broke my heart! 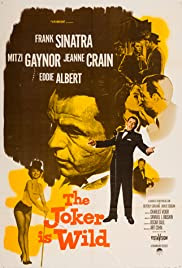 As I have my own little film festival, going through my soon-to-be-defunct DVR, I landed on The Joker is Wild. This 1957 movie is one of Sinatra's best. He's in fine voice, singing "I Cried for You," "All the Way," and my favorite, "Chicago (That Toddlin' Town)."†  But he also gives a fine dramatic performance.

This movie had a massive impact on me when I was a kid. I saw it the first time when I was a teenager, babysitting. The kids were asleep and I was alone in the parents' bedroom, eating chips, drinking soda and watching old movies. Because it's Sinatra singing the oldies, I assumed it was a merry Hollywood musical. It is not.

Very bad things happen to good people. (It has one of the most harrowing bloody scenes I recall in a black and white film; especially disturbing when you're a kid watching alone in a strange house.) Heroes do not necessarily behave valiantly. True love does not conquer all.

This is because the story didn't come from a scriptwriter's imagination. It was based on real events. (I've been to The Green Mill, the bar where Sinatra/Joe E. Lewis chose not to perform). The story was well-known enough that, when I told my parents about the movie, they confirmed the bare bones of the plot.

The message I learned in theory that long-ago night -- that life doesn't work out the way it's supposed to -- has, of course, been born out time and again in real life. I appreciate that Francis prepared me (somewhat).

*Ava and I call him Francis.

†Screw you, New York. He sang two songs about us: "My Kind of Town (Chicago Is)" and "Chicago (That Toddlin' Town)." And he sang our songs first, thank you very much.