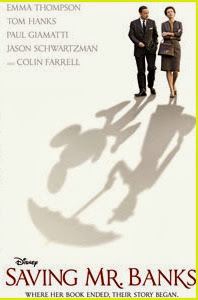 How I loved this movie! The story of how P. L. Travers' book made it to the screen was tailor-made for me.

I've mentioned several times that Mary Poppins is the first film I ever saw on the big screen and it ignited my lifelong love affair with going to the movies. I remember the big, heavy red curtains opening to reveal the rooftops of London. And that was when the magic started. Mary Poppins slid up banisters, went to tea parties on the ceiling, jumped into a chalk painting, and descended from the skies holding an umbrella with a talking parrot handle.

We saw it as a family downtown, which was a huge ass big deal at the time. The Loop was only a half hour away from our suburban home, but my father was allergic to making the drive. The city offered too much traffic, too much diversity. And yet I wanted so badly to see it. The commercials and promotions during Wonderful World of Disney had enchanted me. I was one obsessed little girl, and so my parents went out of their way to make the movie happen and give me such an important memory. (Of course, my dad -- being my dad -- had to make it toxic. It had started to rain and he was upset that there was no parking available in front of the theater. I had caught sight of the marquee and had begun bouncing around in excitement. For once my enthusiasm trumped his negativity.)

So the slow, inevitable reveal that P. L. Travers felt Mary Poppins, the magic nanny, arrived at the Banks home not to rescue the children but instead their father had real resonance with me. I wish my father had enjoyed his family more, had enjoyed his life more. I admit I cried more than once during the conversations about the "Let's Go Fly a Kite" number.

Then there's the character of Mrs. Travers herself. She reminds me so much of the cousin I visited last month in Tampa! So little interested her, so little made her happy."I couldn't care less" was the phrase she snapped out over and over and over again.

I don't want to end up like my dad or my cousin. I want to hang onto to my warmth and humor and humanity.

Maybe I need to fly a kite.

Starting anew by looking back 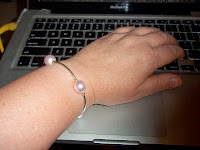 The opening salvo was a celebration at Miller's Pub. Under the el tracks, this Chicago institution has been run by the same family since the 1930s. It's all dark wood and signed photos of celebrities. I don't remember what I ordered, but I had a side of mashed potatoes which was really good. Anyway, it was Mindy and her husband and me and John. I've known Mindy and John for (gulp!) 32 years, and they knew one another before I came on the scene. I see John often and talk to Mindy regularly, but John and Mindy are seldom in contact, so I was the hub. Mindy and Alan gave me this lovely "gratitude bracelet." It has four beads, and whenever I put the bracelet on I should assign something I'm grateful for to each of the beads. I think it was my favorite present this year. I felt bad that I got annoyed by what a snob Alan can be. I mean, here are people who are happy to see me, and brought me a really nice and thoughtful gift, and I'm biting my tongue. I must stop being so judgmental. I've really got to work on that in 2014.

Then on Monday, it was off to Key West. Flight down -- through Tampa -- was very uneventful, 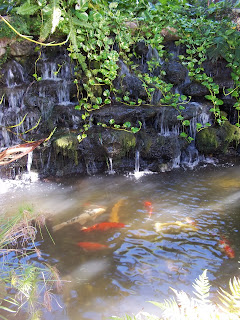 which left me grateful and relieved. The hotel was wonderful! In addition to a nice, clean little pool, I had my own patio with a view of the sweetest little coy pond. They also had a happy hour every night, with free hors d'oeuvres. The Swedish meatballs were a mistake. I spent the Christmas Eve service worried about ... intestinal distress. Still, it was a lovely Christmas Eve. I was worried that no hope for a White Christmas would make me sad. But no. I was good with starting the day with a dip in the pool and ending it dangling my sandals at the bar. As long as I can gaze upon a Nativity scene and sing carols, I've got my Christmas. 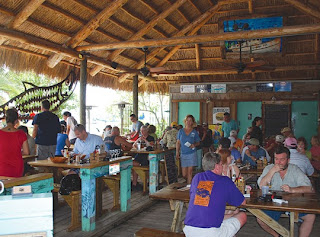 Christmas Day we went to the beach so my pedi could dip into the Atlantic Ocean. Then we exchanged gifts -- I got a trio of Key West t-shirts, one I'm wearing now as a nightie. Then we ate outdoors, which is certainly a Christmas Day first for me, and watched the boats at the marina. The dinner was so big I left with a doggie bag. Fortunately my hotel room had a microwave, so I finished my Christmas dinner for lunch the next day on my little patio table, looking at the coy pond. 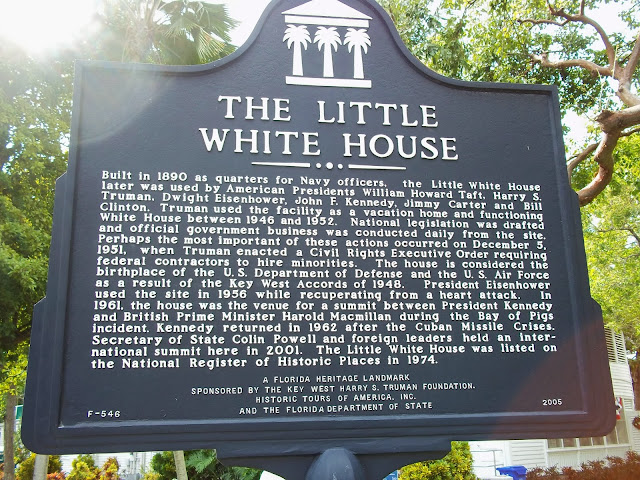 I was on my own on the 26th, since both my friends had to work. I went to the Truman White House. It was only my second time there and my first this century. How I love my Presidential history! I loved being in the house where JFK met with Prime Minister MacMillan and seeing the desk where Truman signed the order to desegregate the military. The Carters and Clintons have also stayed here, post-Presidency. I also enjoyed wandering around the surrounding neighborhood, aka the Truman Annex. I must remember to return there next year. I really, really enjoyed it.

Then I came home. (This time through Ft. Myers, also a very easy trip.) I arrived Monday night and left Friday afternoon and that was just long enough. One of my friends was really getting on my nerves. Shame on me, I know, because he was so welcoming and loving. For more than a year he's been working on a novel. It's not to my taste,  but his heart is in it and so I've been reading it and helping him with the editing. As have two other women and his writer's workshop. It was monumentally annoying to me to hear how he ignored most of my suggestions. And not just mine -- he's blown off just about everyone he's asked for advice. First of all, why solicit advice if you're not going to listen? And secondly, he's never been published. What makes him so sure his work cannot be improved upon? But, it's like my reaction to Mindy's husband the previous Sunday. I let comparatively small things burrow too deep under my skin. It serves no good purpose except to make me unhappy. Stop judging, Gal! STOP! Give people a break!

Monday I celebrated Christmas with my niece and nephew. It was fine. They liked their gifts from me and their presents to me -- an umbrella from her and a pedicure set from him (his first-ever trip to the cosmetics aisle!) -- were appropriate and thoughtful. My niece's boyfriend was getting on my nerves. He kept whining about the time change (just an hour; I mean, really!) and referring to his iPad for local news from Michigan instead of participating in our conversation. I was very proud of my gift to him -- a framed antique postcard from the hometown he loves so -- but he rather blew it off. So in all, I was happy to get out of there. And again, shame on me! He's her boyfriend, after all. She loves and he's very good to my nephew. Why am I always such a bitch?

Well, that's most of my update. Gonna take a break now and work out my resistance cords. It's a new year, after all, and it's time to take my annual stab at being healthier!