1. when did you last sing to yourself? Well, I sang to my cat. Does that count? Her name is Connie. When I was putting her dish down, I sang, "Connie, how I love you, how I love you, my dear old Connie ..." She purred. No music critic she.

2. if a crystal ball could tell you the truth about anything, what would you want to know? What will my life look like one year from today? Will I still have this job? Will I be living in this condo?

3. what is the greatest accomplishment of your life? I have built a pretty good career, even without much formal education.

4. what is the first happy memory that comes to mind, recent or otherwise? Meeting Connie at the animal shelter. She had been rescued from a hoarder situation. Her gums were a mushy mess. She had an eye infection. And yet, she was still so affectionate and trusting! Her spirit touched and inspired me. Here she is with my nephew, while I was filling out the paperwork to bring her home. It's been my pleasure to give her a good life. 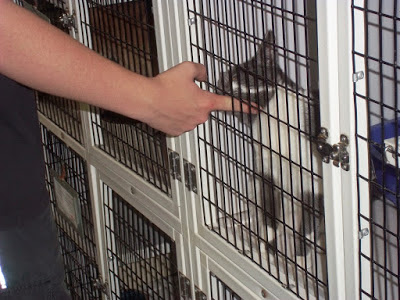 5. if you knew that in one year you would die suddenly, would you change anything about the way you are now living? I would make sure that I didn't leave things unorganized or unsaid. I saw a lot (and hopefully learned a lot) from my mother's passing and the aftermath.

6. do you feel you had a happy childhood? No.

7. would you ever have a deep conversation with a stranger and open up to them? I remember having a serious conversation about the death penalty with a woman I'd just met at a party. Her husband -- a coworker of mine -- laughed that he wasn't surprised, since neither she nor I have any talent for small talk.

8. what would you title the autobiography of your life so far? The Thing of It Is. I say it an awful lot.

9. how do you feel about tattoos and piercings? explain. I don't want any more piercings or any tattoos at all, but that's me. Your body is your business.

10. do you wear a lot of makeup? why/why not? I wear less with each passing year. I think it ages me. Now I only wear tinted moisturizer, shadow and mascara. No more lipstick, blush or eyeliner for this old gal.

11.The world is listening. pick one sentence you would tell them. Donald Trump is not representative of America.

12. who in the world would you most like to receive a letter from and what would you want it to say? A man I was once involved with, and who I still love in my way. After we split, he had some career problems and then a special needs child and a divorce. I'd like to hear, after all that, that he's OK.

13. do you have a desk/workspace and how is it organised/not organised? I'm a slob. And yet, at work, I can always find everything. (At home is another matter.)

14. what’s your starbucks order, and who would you trust to order for you, if anyone? Hot chocolate, no whipped cream. And then, a dash of cinnamon on the way out. And no, I wouldn't trust anyone to order for me.

15. what is the most important thing to you in your life right now? I'm obsessed with my home. Will I have to prepare it for sale? Or will I stay here forever?

But you got to have friends

Bette Midler's "Friends," in this particular context, has been running through my mind. The Last of Sheila is one very twisted movie. A group of friends/coworkers take a weekend pleasure cruise that reveals just how contemptuous, vindictive and perhaps even murderous they can be. Bette sings over the closing credits.

I think I may have behaved badly with my own friends on Friday night. Or maybe I was right to be annoyed because they are annoying. Certainly I love them. But maybe it was the group dynamic. Maybe I'm a bitch. But I would have preferred Friday night not happened.

Mindy and Alan. John and me. We get together for Christmas/Hanukkah every year. We begin planning it in October. This year it didn't actually happen until February 15. That's three months of, "Oh? Did I say that date? We'll be in Florida." and "I have to reschedule." Etc., etc. It's frustrating. Here's how my life works: I have a calendar; I check it before I commit to something; then I write it down; if something else comes up, I say "no." I believe this is the way people have been planning their schedules since the Middle Ages. More than three months of back and forth is exhausting.

We finally had a restaurant chosen: Boston Blackie's. Convenient to the train for Mindy and Alan. Literally across the street from John's office. A bit of a trek for me, but I don't care. Good burgers. Good sandwiches. Casual atmosphere.

So hurray! We finally have a date and a place we all agree on! Except we didn't.

Day of -- just hours before -- John changes his mind about Blackie's. They don't take reservations, and it's Friday after work. "Millennials" are loud when they get together on Fridays after work. Mindy recommends Rivers, a bistro in the same neighborhood that takes reservations. Rivers is a lifestyle away from Blackie's. It caters to the pre- and apres-opera crowd. Plans were changed. Without me.

I had a doctor's appointment on Friday when the emails were flying back and forth. I didn't think I needed to check my phone because, well, planning since October. Date and place chosen. Why would it change now?

Because it's Mindy and John, that's why.

Mindy works from home. She could slip into a lovely pair of slacks, black blouse and bright pashmina before leaving for Rivers. I was already downtown. At work. Dressed for Blackie's. Old Navy fleece and jeans and heavy boots with treads. I also had cash in my wallet for Blackie's, not Rivers, where everything is ala carte.

Oh, well. Fuck it. I didn't even respond to the emails. I just showed up at Rivers.

Where John was at the bar already. Rivers was virtually empty, but they wouldn't seat us until we were all there. I hate places like this.

Then John starts freaking out about the prices on the menu. He just had lunch at 2:30! He didn't want to pay these prices for dinner!

At this point, I really hated him. First of all, he knew we were meeting for dinner tonight somewhere. Why wait until 2:30 to eat lunch? And he was the one behind the venue change because he decided he hates Millennials. You know what Millennials do really well? They check menus  before making a reservation.

Mindy and Alan showed up. None of the three of them like the menu. Everything is "too heavy," "too much." See comment above. At this point, I am trying not to scream.

John asks the waitress if he can order off the bar menu. She graciously acquiesces. I don't know what difference it made, though, since John barely touched his plate and asked her to package everything to go.

Mindy hates Facebook. Alan hates his job. John hates noise ... and Millennials. No matter who or what we talked about, John asked the age of the person at the center.

I was telling a happy story about a new coworker. She's a Senior Vice President, but because of open seating she doesn't have an office and ended up next to me. She's been wonderful to me, helping me with advice and acting like a guardian angel. My point: I thought I'd hate open seating (and I kinda do), but isn't it great that it brought Trisha into my life?

John: How old is she?

John: How old does she look?

Me: I don't know. I guessed 45 because she has seven year old twins and when she told me her sons were seven, she said, 'You were expecting me to say 17, weren't you?' So ...

Mindy: So she had fertility problems? Do you think she had IVF?

Mindy: I wonder where she had her fertility treatments.

Me: She just moved to Chicago and ...

When the bill came, Mindy and Alan paid it. Which was gracious, and I was grateful. But even that annoyed me because I ordered the cheapest thing on the menu because that was all the cash I had. I am trying not to dream of the jumbo crab cakes and remember that at least the pasta/chicken dish was free.

I would have been happier home alone watching TCM.

And I love these people! Sometimes I think I'm no longer fit for polite society.