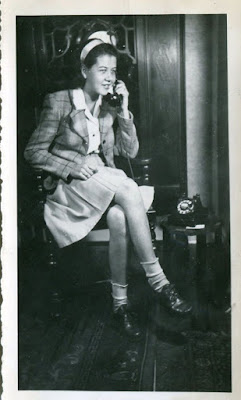 We email back and forth often, but we haven't spoken since before Memorial Day. I'm so happy to hear that he's settling in to his new job at the local library. The paycheck is a bit smaller than the one he received from his work at the newspaper, but he's OK with that for two reasons:

1) The hours are consistent and stable, which is easier on his nerves, his sleep pattern and his relationship.

2) The benefits are so much better. His partner is still racking up the medical bills, and the new healthcare covers more than the old did, which puts a bit more budge in their budget.

He really enjoys the work, too. He was so excited that he scored a Kennedy biography for me. The library regularly purges books that don't get checked out. They sell them at a fundraiser. He found one that he knew I'd like and offered to buy it. His boss told him to just take it. I can count on finding it under the tree at Christmas.

And I love talking to him because he's such a good, warm and loving person. It makes me happy that he's in my life.

Between the bed bugs and the PI-IBS/c. diff combo platter, I think about two unsavory things far more than you do, two things that aren't often discussed in polite company.

Welts on my skin. Every time I have an itch, I race to the bright light in the bathroom and make sure I don't have a trio of flat, red marks in a zig zag pattern. I don't. I haven't since that I spotted that trio of bites on my left foot -- likely incurred in our infested laundry room -- over Memorial Day. But I worry. I spray my hems, my shoes and my bags with rubbing alcohol every time I enter my threshold. Just to make sure I didn't pick anything up in the hall. The canine inspection revealed no bed bugs in my unit. The visual inspection at the time of my preventive treatment showed no bed bugs in my unit. But I worry.

My bathroom trips. Are you familiar with the Bristol Stool Scale? I am. I consider it at least once a day. So far I haven't had a recurrence of the c. diff or PI-IBS, but recurrences are not uncommon. I'm seeing my GP for a regularly scheduled follow up on 7/11. She and I need to talk about whether I'm vigilant or silly.

Today's church service featured opera and opera music. This was to drum up awareness and support for a local opera company that works with at-risk kids in tough neighborhoods. The goal is to use the emotionalism of the music to inspire these teens to express themselves artistically.

It's a laudable goal.

But I simply hate opera. My mind was wandering all over the place as the soprano sang. If I have to sit through one of those solos, I want to be rewarded with Harpo Marx. That's how it happens in the movies, you know.