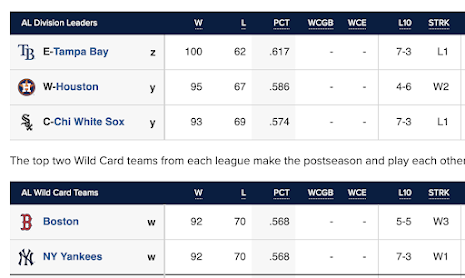 So the Yankees made it to the post-season. By only the absolute slightest margin and at the absolute last minute. But that's OK, it just made it all more exciting.

The guy on the right? That's my Rizz. Takin' selfies during the clubhouse celebration. If he was still a Cub, he'd be cleaning out his locker and planning a return to the links in Florida. So, while my heart is broken that he's gone, I'm happy for him. For he is "Built for October." 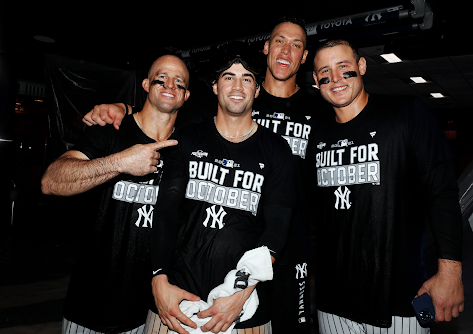 BTW, my Rizz is 6'3. The guy next to him, Aaron Judge, is 6'7. The player to Judge's immediate left is Tyler Wade. If I were a Bronx high school girl, his picture would be in my locker. The guy on the far left is Brett Gardner. He's been a Yankee forever and, at 38, I don't know how many seasons he has left. I'm happy for him.

But not as happy as I am for Rizz. My favorite most Cub deserves only good things. GO YANKEES!

What some of us live with, day in and day out

I live in Chicagoland. Guns are a way of life here. An ugly way of life. Since Friday, two people were shot dead within five miles of my home. Here are the headlines:

10/1: Teen killed when a vehicle pulled up beside his and opened fire (4 miles from my home)

Those are the just the gun-related deaths within 5 miles. In two days.

Since September 27, there have been 17 gun fatalities within the City of Chicago. That's in one week, folks. It's so bloody here that, to be very honest, I don't even remember most of the gun violence I hear on the local news anymore. I'm inured to the carnage, the way people who work in a slaughterhouse must be.

Yes, Illinois has very strict gun laws. But they are ineffective because of the flow of money and weapons through porous state borders. Most of the guns used in crimes here been resold, and came in illegally from Indiana and Kentucky. (Gee, thanks neighbors!)

This is what I live with, every day. So please don't expect me to relate when you tell me that a riot that took place near you, more than a year ago, changed your mind about owning a handgun. I'm sorry you were frightened more than a year ago, but people are being shot and killed every day here. (Remember, I'm only talking about fatalities here, not shootings. The number of shootings is, obviously, much higher.)

By the way, a man was killed in the summer 2020 riot, 3 miles from here. I had to look it up. I didn't even recall it specifically. There are too many gun deaths around here for it to stand out.

If owning a gun makes you feel safe, if knowing you have the power not only to protect but to destroy makes you feel better, that's your legal right. I'm not disputing the Second Amendment, which appears clear and definitive.

But in my heart, I believe the world would be a better place if we could melt every fucking handgun down and make carousel horses with the metal.